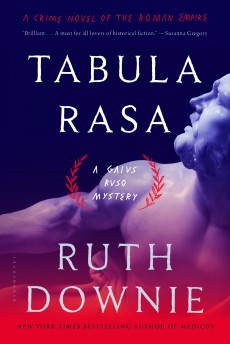 Legion doctor Gaius Ruso and his wife Tilla must solve the mystery of a missing military clerk and a local boy to avoid threatened rebellion during the building of Hadrian’s Wall.

Ruth Downie may not be as well known as Lindsey Davis, but when that queen of togate ’tecs finally hangs up her crown and the Falco family settle to well-rewarded retirement, she’ll be first in line to take over the title.

She is already scouting the ground. After six clever and entertaining adventures for military doctor Gaius Petreius Ruso and his British wife Tilla set in England or Gaul, there’s a strong hint on the final page that his next assignment may be in the capital of the Roman Empire.

If you’ve not come across the medicus of the XX Legion before, he’s a very different character to Davis’ morally flexible Falco.

Ruso is simply a nice guy, trying to do the best job he can under often difficult circumstances. He’s complex and engaging, representing at the same time the best of his profession and the best ideals of a system which brought civilisation to most of the known world.

When the Legion is detailed to the part-finished Hadrian’s Wall – even the Romans gave up on the Scots and retreated to a place where they could shut them out – Ruso finds himself straddling a shaky line between occupiers and occupied. The locals are on the verge of another revolt, despite the latest having been put down with typical Legion efficiency and brutality. Losing their farms and livelihoods to the construction of the wall has left them surly and rebellious. They are also his wife’s people and she is determined to re-establish contact with what remains of her relatives – in the circumstances something of a problem.

Their efforts are rudely halted when first Ruso’s new military clerk goes missing, then a local boy, who passes on a rumour of a body being buried in the wall’s infill, also disappears while in the company of an unidentified Roman soldier. As tension mounts, Ruso and Tilla pursue both a joint and separate investigations. Both face danger as they gradually uncover an intricate plot involving switched identities and slavery.

Both the medicus and his wife are beautifully drawn and utterly believable characters. The huge supporting cast, from the tough, politically savvy Tribune, through the common soldiery to the ancient, traditionalist head of Tilla’s family, never let the principals down.

A finely constructed and unusually thoughtful plot, plenty of action and a detailed background of how people lived and interacted socially and politically, make this an intelligent, compelling and satisfying read.

It is a tribute to Downie’s skill and sheer descriptive ability that everything about the book has the feel of authenticity. But it is the all-too-human Ruso and his equally smart and determined wife, facing and overcoming their problems with compassion – and, at times, a good deal of physical bravery and daring – who make this story stand out.

If that sounds all too worthy, there’s plenty of often wry humour too, to enliven the sub-plots and produce an even more rounded depiction of the main characters.