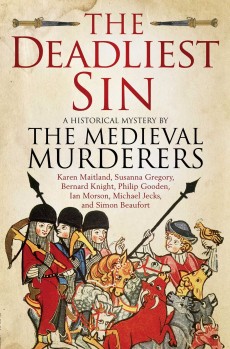 by The Medieval Murderers

In the Murderers’ tribute to Chaucer’s Canterbury Tales, a group of pilgrims on their way to Walsingham tell their stories of the Seven Deadly Sins.

Readers may recall a bureaucrat, courtier, spy, diplomat and public servant  – anything from comptroller of works to customs chief for the port of London – who around 1380 started work on a collection of more or less bawdy morality tales based on a group of pilgrims heading for the shrine of Thomas ’a Beckett at Canterbury.

Now, in what as only can be described as a tribute performance, The Murderers, a loose grouping of some of the top historical crime writers around, have revamped Geoffrey Chaucer’s idea – the launch of English literature – in the light of nine centuries of history.

The setting is 1348, two years after the crushing victory of Edward III’s army at Crecy and the later capture of the key port of Calais. But joy has been overtaken by fear. The Black Death, which has swept the Continent, destroying whole towns and visiting castle, abbey and hamlet alike, has crossed the Channel. In an age where men believed God and the Devil fought a daily battle on earth for their souls, many took to the road in pilgrimage to assuage what they saw as God’s wrath, pray for deliverance or purge their past misdeeds.

The book follows a party on their way to the shrine of the Virgin Mary at Walsingham, one of the holiest sites in England, not far from the bleak coast of Norfolk. Stranded by a storm some miles short of their goal in the village of Mundham, they seek shelter at the Angel Inn. The landlord, anxious to keep this unexpected bonus income, encourages them to wait out the weather.

To pass the time and with the thought of sin and redemption on their minds, he suggests they try to decide which is the worst of the Seven Deadly Sins – one so great it may even explain the punishment of the Plague being inflicted on humanity.

These are their stories: Michael Jecks tells a tale of Lust; Ian Morson of Greed, then goes on to expose Gluttony; Susannah Gregory, together with her husband writing as Simon Beaufort, of Sloth; Philip Gooden tackles Anger; former Home office pathologist Bernard Knight, Envy; and Karen Maitland, who also contributes both prologue and epilogue, offers a chilling portrayal of Pride.

This tenth book in the Murderers’ nine-year collaboration has everything you would expect from them: historical accuracy from the glittering Venetian case vecchie down to the mud and shit of a 14th century English village, great, if not entirely new, stories, pathos, humour, horror and brutality.

The authors are all absolutely at the top of their game, and their writing contrasts and complements each other. The sum is a great historical novel. It’s pointless to try to describe the stories individually. My own favourite, as a former soldier, is Jecks’ harrowing tale of lust, set around the filthy near-year-long siege of Calais. Others will choose differently. Then wait for the Murderers to strike again!