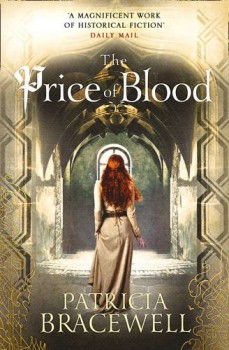 The Price of Blood

Queen Emma of Normandy, threatened by Viking invasions, a brutal and unstable husband and enemies at court, struggles to defends both her children and her crown.

Emma of Normandy made her entrance in Shadow On The Crown. Now trapped in a loveless marriage with England’s psychologically damaged King Æthelred, she has given him a son and heir, but faces a constant struggle for survival in a court and country hurtling toward disaster.

The book is set over a six-year period from 1006, with chapters prefaced by dry and often obscure accounts of key events from The Anglo-Saxon Chronicle, and is an eminently believable and heartbreakingly personal tale of an intelligent, proud and bold woman, fiercely protective of those she cares for and the country she unwillingly comes to love.

In a time of which there are few reliable records – and certainly none of the women of the age – Patricia Bracewell has produced a masterpiece which has shades of George RR Martin’s early Game of Thrones and echoes Bernard Cornwell’s Saxon Chronicles (indeed, one of Uthred’s descendants plays a role.

The rivalries of the court and a grim record of brutal acts illuminate the fears, affections and struggles of her characters. A beleaguered Æthelred, still haunted by the ghost of the brother whose murder at Corfe Castle he at least connived at, governs with an iron fist, his primary policy, which embraces casual murder, to keep his strongest leaders fighting each other so they will not rebel. Blinded by mistrust of his elder sons and his queen, he leaves England vulnerable to a rising tide of Viking raids.

Against this backdrop, Emma must find a way to stand against the raiders, her own husband and a driven and conniving woman who will use poison, sorcery, or her body to steal the crown she believes should be hers.

The young woman of the first story has been forced to become a sophisticated and smart campaigner who can engage in power struggles with the self-destructive Æthelred and his coterie of venal and self-serving supporters. Bound by conflicting vows and needs, she tries to act in the best interests of her children, the king and England despite her own hold on power being so fragile, even forcing her into confrontation with the man she loves.

This series of conflicts within a portrayal of family dynamics at their most disastrous produces a psychologically taut story filled with suspense and tension. Related from several different viewpoints – Æthelred’s warped mindset that suspects evil intent of all around him is an interesting study in paranoia – this is not a happy story, and one that can only worsen as England plunges towards the most disastrous period in its history.

But it’s a book, if you’re a fan of historical fiction, you should not miss. The Price of Blood is a deeply insightful piece of work with compelling central characters, which draws the reader ever deeper into what was truly the dark ages.