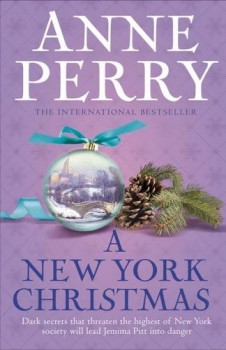 Jemima is accompanying her friend Delphinia to New York to help her with her wedding to the son of a wealthy and influential American family. When Delphinia’s long-estranged mother makes an appearance, Jemima is drawn into a dangerous search to try to prevent her spoiling the wedding.

Jemima Pitt is the daughter of the Head of Special Branch in England. She is accompanying her friend, Delphinia, to New York as Delphinia has no mother. Phinnie is about to marry Brent Albright who is the eldest son of a wealthy and influential American family, very much a part of New York high society.

Phinnie has been brought up in England by her father, as her mother left the family when her daughter was very young. So it is more than a surprise when Jemima is told by Brent’s younger brother, Harley, that Phinnie’s mother is in New York too. Jemima agrees to help Harley find the mother to ensure that she does nothing to spoil the wedding. During their search they come across a dead woman and Jemima ends up in prison accused of her murder. Has she inherited enough of her father’s investigative skills to be able to prove her innocence?

The story is set in the very early part of the 20th century. There are numerous small details throughout the book that illustrate the times, including at the start references to the “huge vestibule and many formal rooms” of the ocean liner on which Jemima and Phinnie cross the Atlantic with people travelling in “magnificent winter dresses.” Similarly in New York, on a snowy day, mention is made of the beautiful snow-laden trees in Central Park, and of people battling against the cold wind whilst walking along the snowy pavement, and an automobile passing them with the driver “sitting up rigidly” behind the car’s narrow glass windshields. Such details are so effective in painting pictures of the life-style of the times.

Winding through the story are issues of morality, and different kinds of love: genuine love as opposed to love because of money and lifestyle or background; themes of kindness and anti-consumerism which seem so appropriate for a Christmas novella. The types of love are objectified in the actions and the relationships of the different characters. In addition to the issues, the book is also a well-formed crime story that keeps the pages turning.

If there is any criticism at all it would be that the beginning of the book seems very slow and with too many characters introduced too quickly. However, the reader should stick with it as it turns into a well-paced, interesting and ultimately uplifting read.