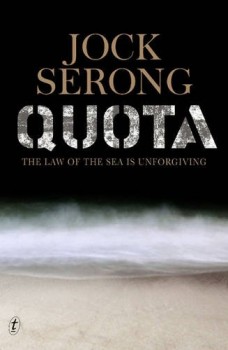 Lawyer Charlie Jardim visits a remote coastal town to firm up the prosecution case against two men for murder, but finds the locals hostile.

Heavy drinking and anger management problems are frequently found in fictional detectives; here we have a lawyer similarly troubled. Charlie Vadim’s girlfriend has cut him loose, and a spectacular tirade in court aimed at the judge will not further his career. Weir, a colleague and friend, aims to help by giving him a brief which takes him from Melbourne to the isolated town of Dauphin, on the coast of Victoria.

The case concerns the murder of Matt Langham on his own boat: the accused are Skip, one of the rich Murchison family, and his mate Mick. Matt’s brother Patrick claims to have been at home during the events, but Weir and Charlie find this unconvincing. Matt and Skip had business involving over-quota abalone and cannabis, and it seems unlikely that Patrick would accept Matt making a rendezvous at sea without backup.

In Dauphin, Charlie finds few willing to talk, but after a few weeks gets to like the town. Patrick eventually unbends enough to reveal a bit more about the night of the crime, but the question remains as to whether a change of testimony will be sufficient to secure a conviction of the two accused. The action returns to Melbourne where the drama is played out in court.

This is Jock Serong’s first published novel, and there is much to like. The courtroom scenes are well done, and Charlie’s initial rant at the judge is very funny. Charlie is clearly a man with unresolved issues, and the dark brooding atmosphere of Dauphin seems even more threatening in the context of his mental turmoil. The Murchison family has a powerful grip on the town, and the matriarch Delvene is a particularly chilling character.

The structure of the book doesn’t quite work, however. It starts with the focus firmly on Charlie - his problems, his blow-up in court, and his regaining of control and confidence in Dauphin. However, when proceedings return to Melbourne, he is relegated to observer, and he effectively fades from sight. The author seemingly creates the possibility for him to do more in court, but the opportunity is not taken up.

In contrast, Patrick is seen initially as a bystander, and we see him only through Charlie’s eyes as a reluctant witness until the court case, when he becomes central to the action. In fact he is such an engaging character that he steals the limelight. A young man who has lost both parents and a brother, with three younger siblings to take care of, in a town owned by a forceful family who hate him, is bound to be more compelling than a lawyer who can’t stay off the sauce.

Notwithstanding the above, the story is well told and leaves a surprise for the last few pages. I will look forward to Serong’s next.