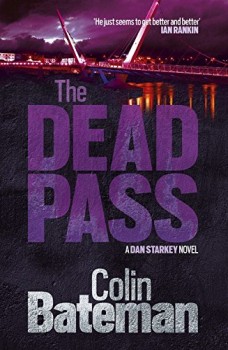 PI Dan Starkey is hired by a former political activist to find her missing criminal son who she believes has been killed. When she is murdered, Starkey’s investigation takes him into Derry’s underworld, dominated by a new generation of gangster-terrorists.

How much mileage can there be in a picture of an Ireland where extremism of one sort or another is never far from the surface, where former paramilitaries battle over drugs turf, the only common currency brutality undreamt of even in the worst days of The Troubles? Besides which Desperate Dan – a title he deserves for some of his laboured humour – is getting a tad long in the tooth for the violent stuff.

If his previous outing in Fire And Brimstone, which featured a new teenage female Messiah and an extreme religious group was a little OTT, this covers much of the same overworked ground.

Unreformed punk and occasional drunkard Starkey is hired by a former republican political activist to trace her missing son – an unpleasant criminal and homosexual with a sideline in pornography who she is convinced has been killed.

Pleased to be free of his new obligations as a grandfather, Starkey travels to Derry, only to find his client shot and floating beneath the city’s Peace Bridge and he is dragged into the city’s underworld, where a new generation of gangster-terrorists is intent on creating another reign of terror.

It’s not worth trying to describe the convoluted tale that follows as Starkey, with attendant cast, blunders, bluffs and wisecracks his way through almost unrelieved gloom, crime and violence.

Needless to say he gets several good hammerings, is improbably rescued from death at the very last minute – and comes out of it all a hero, having not only saved half the British army presence in Ulster, but also the Messiah!

The Dead Pass is not perhaps so fast and furious as some of his earlier adventures, which is just as well as he seems to be feeling the pace. Nevertheless, this is quintessential Starkey – superb, if wildly unbelievable entertainment, and, like all the others, a great read.

But somehow I can’t place Starkey in the Twitter age and the introduction of web speak with ‘lols and ‘cbas' tossed around brought a straight ‘ffs’ from me it seems so out of character.

Overall, if you’re a Starkey fan, you’ll love it. Do so while you can because it left me with the impression that he – and his creator – are running down towards the end of a beautiful relationship. Both appear to have become a little jaded.

It could be time for Bateman to press the ‘off’ switch and look for a new hero/ine. He has a natural in the spunky, wisecracking crime reporter Sara Patterson – and she could always bring Starkey out of retirement if she needed help!