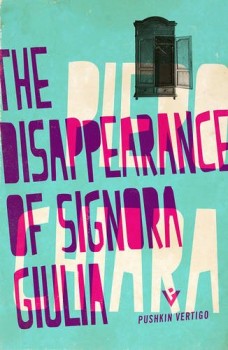 The Disappearance of Signora Giulia

When the much younger wife of an eminent lawyer disappears, Commisario Corada Sciancalepre must trace her, but finds himself deep in a tangled mystery.

Pushkin Vertigo have set out to broaden our reading horizons, offering translations of European works by authors who are household names in their own countries and deserve a wider audience.

Piero Chiara, who died in 1986, is one such. A multiple Italian literary award winner, poet, screenwriter and actor, this is the first of his works translated into English. The one-time court employee, journalist and teacher was a self-taught literary dynamo. Forced to flee to Switzerland in 1944 to avoid arrest for his criticism of fascism – it’s said he posed a bust of Mussolini in the dock of his court – he returned after the war to produce a tidal wave of novels and short stories and become one of the  most celebrated writers of the period.
Many of his books were filmed, both for screen and TV and he often appeared in these adaptations – usually, like Hitchcock, in small or cameo parts.

This novella is set in the mid 1950s, in a small un-named town in northern Lombardy, where Chiara spent his childhood by the shores of the beautiful Lake Lugano, and there is more than a touch of the biographical in his work. His writing has a distinctly cinematic quality, while cleverly and, at times sardonically, highlighting the pretensions and false righteousness of the local bourgeoisie.

Commisario Corada Sciancalepre – his name roughly translates as lame hare, a typical Chiara joke – is much respected by the people of the town and it is obvious that the autocratic and austere lawyer, Esengrini, will turn to him for help when his beautiful and much younger wife disappears.

Signora Guilia spent every Thursday visiting her daughter at boarding school in Milan. Before long, the town becomes a hotbed of gossip and speculation – la bella Signora has left her husband for a younger man, simply run away – or been murdered. All eyes turn to Esengrini and even his own daughter is suspicious of him. Sciancalepre, constantly expecting, but never quite achieving, promotion, becomes obsessed with the case, following up endless blank leads over a period of years. It seems as though it will never be closed, but the answer lies closer to home than he has realised.

Chiara saves his most original touch to the very end, with an audacious, even outrageous, denouement readers will find either refreshingly ambiguous or maddeningly open-ended. This is very much a mystery story and this clever puzzle falls more into the category of literary fiction rather than crime.

Even when apparently vital clues are uncovered, Sciancalepre’s response is often distanced and there is little obvious tension. Sherlock Holmes would have been delighted with this dry examination of how the shadow of crime affects all involved – even on the extreme fringes.
Chiara’s writing is precise and delicate and while some of the finer nuances may have been lost in translation, this lovely little book conjures up a vivid and lasting impression of both place and people.

It is a light and bright read for those tired with the thud and blunder school of crime writing.