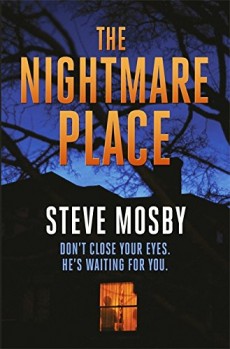 DI Zoe Dolan is hunting the attacker branded The Creeper, whose violence is escalating, but she has no clue how he has been getting into the victims’ homes, no pattern to his attacks or no idea who could be next.

In many years as a crime reporter, I never heard of a psychopath deliberately targeting a detective. I also never heard a senior officer ever address a junior as ‘Detective’ – even during the most horrendous bollocking! And must every character have some peculiar psychological hang-up? This is, after all England – where on the whole people tend to be quite normal.

They say a little knowledge is a dangerous thing – and readers are more struck by things they can easily relate to and imagine. Frankly, parts of this otherwise excellent book, are just too far-fetched for a story set in a northern city – presumably Steve Mosby’s home of Leeds.

All of which is a real shame, because parts of Zoe Dolan’s tale of bad-girl-made-good are touching, particularly her relationship with the old copper who sparked the transformation. DI Dolan is jointly leading a team hunting the attacker branded The Creeper – whose violence is escalating towards murder. But the police have no clue how he has been getting into the women’s homes, can find no pattern to his attacks and have no idea of how he selects his victims.

Their breakthrough comes when Jane Webster, a helpline volunteer, gets a call from a man whose voice has the ring of truth when he says he loves these women – but his love ends in blood. Is her caller really The Creeper? She overcomes her own reluctance and breaks her organisation’s code of confidentiality to tell the police, but her action puts both her and Zoe in deadly danger.

The plot is well-developed with some clever twists and turns and – unfortunately – all too believable in the light of what doctors have, and are, discovering about obsession. Characterisation, particularly of some of the less important players, is excellent and the settings – especially the grim sink estate on which Zoe grew up and still haunts her dreams – first class.

So it’s a real pity that what is essentially a well-written story explodes into a climax more suitable to some noir super-drama – then reverts back at the very end to being the clever, slightly understated and often insightful work which rivets attention for much of its length.

If you can ignore or get over the sometimes too obvious trans-Atlantic influence this is a first-class read – and Dolan a carefully created and complex character about whom you would like to know a great deal more.