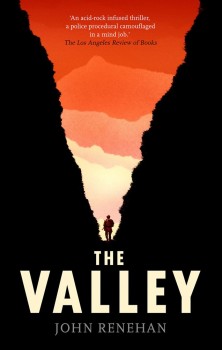 With a past that haunts him and a dead-end admin job, US Lieutenant Black is sick of the army. Then he is tasked with a minor investigation in a desolate northern Afghan valley – and is plunged into a whirlpool of lies, madness, drugs and killing.

America is beginning to move away from its recent unsuccessful military ventures in Iraq and Afghanistan and both are beginning to provide backgrounds for some well-written war novels.

John Renehan’s stunning debut is set in little-known Nuristan, a mountainous province bordering on Pakistan, with an indigenous people said to be descended from Alexander’s armies, fiercely independent and completely apart in looks and culture from other Afghan tribes.

Renehan is an ex-field artillery officer who served with Third Infantry in Iraq. As you would expect his portrayal of life in a near-forgotten outpost under constant threat of attack is almost palpable and the battle scenes are as brutally confused and graphic as only close combat can be.

The story owes much to Joseph Conrad’s Heart of Darkness. The main protagonist, Lieutenant Black, is sick of the army. With a past that haunts him and a dead-end admin job, he is ready to quit. Then he is tasked with a minor investigation in a desolate northern valley – and plunged into a whirlpool of lies, madness, drugs and killing.

In such a story, the initial reason for the journey appears simple, but as the plot unwinds, it becomes steadily more complicated. What are the soldiers of Command Post Vega trying to hide? And why does Black appear to dislike himself so much? Even when he uncovers evidence of an atrocity, the motives are unclear.

Afghanistan probably lends itself better to such a journey into madness than even the Congo, and the story reflects this. Black reaches conclusions most readers will not easily follow and I spent much of my time trying to work out exactly what was unfolding. By the end Renehan has so muddied the trail that even madness cannot explain what took place.

There’s a sort of afterword which attempts to bring it all together, but even with this I was still left as much in the fog as that which rolls round the Nuristan mountains. Perhaps that is Renehan’s aim. He does an absolutely superb job conjuring up the hallucinatory atmosphere at Vega and I have never read a better explanation of the problems which arise from the often extreme disconnect between the men on the ground and command decisions of high-ranking officers and politicians.

The characterisations are superb, from the alpha male senior sergeant to the ordinary ‘grunts’, dragged out of their comfort zones and caught in a near impossible situation. Some of the individual character portraits are so precisely drawn, I wonder how much the author must have drawn on his own experiences.

So too, the descriptions of the wild border country of Afghanistan are incredibly vivid. You will have little trouble visualising the horrors and dangers of COP Vega. Amid all the madness, dead ends and lies, there is a serious point to this tangled and confusing story.

Although primarily a near insoluble puzzle, it also raises the serious question of if or when governments should ask themselves whether knee-jerk military intervention in situations of which they have precious little understanding is worthwhile.

It is greatly to Renehan’s credit that he manages to do this without taking anything away from the often desperate courage, devotion and comradeship of the men tasked with carrying out such missions – and the dreadful toll it takes on them. This is a confusing, brilliant and compelling story of darkness, war and death.