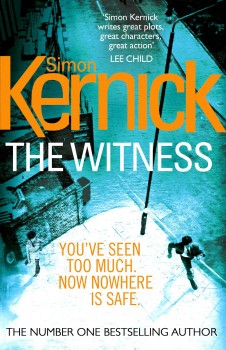 Jane Kinnear is in a police safe house after witnessing a brutal double murder while DI Ray Mason has to catch the killer and foil an imminent terrorist attack.

Jane Kinnear is expecting to spend the night at her lover’s isolated cottage. What she’s not expecting is to be forced to hide under the bed due to the unexpected return of the man’s wife. Even more unexpected is the brutal double murder that follows when a stranger breaks into the cottage. Jane is able to escape, but then the police car taking her away from the murder scene is targeted by the killer and two policemen are shot dead.

Jane is whisked away to a safe house and her location is on a strictly need-to-know basis. Even DI Ray Mason of Counter Terrorist Command, the man leading the hunt for the killer, doesn’t know where she’s being kept. Mason is a man with a somewhat chequered past and a habit of leaving dead bodies strewn around after him that doesn’t go down terribly well with his superiors. But he is also known for getting the job done, and that earns him a relatively free hand.

It soon becomes clear that the killings were either senseless or random. Jane’s lover was an MI5 informant and there’s reason to believe that he was in possession of vital information to help foil an imminent terrorist attack. Mason’s superiors want results and they want them fast.

There were times in the early stages of The Witness when I was getting very definite feelings of déjà vu, and I actually had to stop on one occasion to make sure I hadn’t read this one before, as there were several striking similarities to Simon Kernick’s previous book, Stay Alive, a deadly hide and seek thriller.

The Witness has all Kernick’s usual trademarks: a seemingly ordinary person thrust headlong into extraordinary events, a maverick hero with a dark past, and a story that unfolds rather like a game of pass the parcel, with layers being revealed one at a time. The only downside to this is that if you’ve read several of his earlier books, there’s a high chance that you’ll spot the trick quite a long way before the big reveal.

Despite that, The Witness is a fast-paced romp that provides plenty of entertainment. If you’re new to Kernick’s books, you won’t be spoiled by feelings of having read this one before, but if you’ve been following him for a while, you might well end up thinking it’s time for him to adopt a new plot device. Although even with that caveat, this is still a cut above the average police thriller.