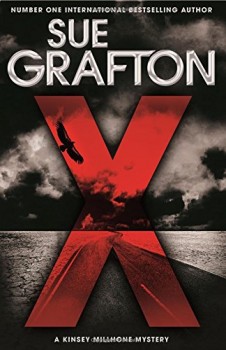 PI Kinsey Millhone receives instructions from a wealthy woman to trace her son, a felon recently released from detention. After completing the task, Kinsey finds that most of what she was told is a lie.

Few crime aficionados will be ignorant of Kinsey Millhone, the California PI who lives in Henry’s converted garage and is the protagonist in Sue Grafton’s letter series running from A to X. X, her latest outing, is set in 1989.

As usual, Grafton has multiple plots running, one kicking off with the elaborate deception practiced on Kinsey to have her locate convicted safecracker Christian Satterfield. Kinsey deduces that the motive for seeking Satterfield is probably connected with his professional skills, and decides to warn him. She also identifies the woman as Teddy Xanakis and contacts her ex-husband Ari, who has reason to suspect his former wife of action against him.

An intersecting story runs parallel to the first, introduced through a request for assistance from Ruth, the widow of Pete Wolinsky, a PI ex-colleague of Kinsey’s who was killed by an intruder in a previous book in the series. Ruth asks Kinsey to check certain records she holds, to satisfy an apparent request from the tax authorities. Kinsey finds material that Pete was holding for delivery to April, daughter of Ned Lowe, and a record in code. With Henry’s help, this is found to contain the names of women all with a connection to Ned, and Kinsey is inspired to follow up.

A third, and rather lighter, story, concerns the activities of new neighbours of Henry and Kinsey, which come to a head over the use of water in the middle of a county-wide drought. This elderly couple, one of whom is disabled, attract Henry’s sympathy, but Kinsey catches them out in a minor legal infraction and believes they are not all they seem.

Kinsey proceeds according to her normal modus operandi, following up lines of enquiry by calls to names which come up, going through public records, and occasionally shadowing suspects. We get a blow-by-blow account of her daily routine: her early morning run, shower and bowl of cereal for breakfast, dinner at Rosie’s, and so on. This is all very familiar and at one point Grafton cuts it short with the comment that it’s all so boring.

This is not my favourite Kinsey Millhone mystery - the initial set-up seems to push credibility a little, given that the last thing you would want to do if recruiting a safecracker is scam a PI with contacts to the police. Also Teddy is given considerable sympathy for her paucity of income when she has just emerged from a multi-million dollar divorce settlement, which seems rather odd. Generally, however, the book maintains the standard of previous in the series and enthusiasts will no doubt want to catch up with the latest twists in the life of the fiercely independent PI.