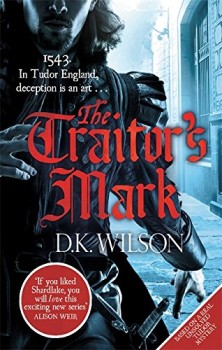 Goldsmith Thomas Treviot awaits a design for an important commission from Hans Holbein, Henry VIII’s court artist. When it fails to arrive Treviot is sucked into the murky and murderous world of Tudor politics.

Historian DK Wilson is an acknowledged expert on the murky world of Tudor politics, particularly the febrile reign of Henry VIII, and has proved his writing ability with acclaimed non-fiction works. His stories have a solid grounding, based as they are on genuine mystery deaths or disappearances. The religious and political infighting of the period should keep him in gainful employment for some time!

But it is his ability to translate Tudor England, accurately detailed, onto the page and bring it to recognisable and sometimes quite spectacular life which marks him out. His unwilling hero is London goldsmith Thomas Treviot who has inherited his father’s booming business.

His status as a member of an influential City Company dealing frequently with the aristocracy and court, the means to support an estate in Kent, and enough youth to be physically active for the rough stuff, make the genuine and likeable Treviot an often baffled, sometimes frightened, but intensely believable, protagonist.

The easiest way to sketch the plot is divide it into fact and fiction.

Fact: Three years after a reactionary alliance of Catholics and traditionalists succeeded in bringing down Thomas Cromwell, author and prime mover of the Reformation, they are targetting the aesthetic and scholarly Thomas Cranmer, archbishop of Canterbury, spiritual head of Henry’s new English church. At the same time, the autumn of 1543, Johannes ‘Hans’ Holbein, the brilliant portraitist and designer and a favourite of both court and aristocracy, disappeared and was never seen again.

Fiction: Treviot is waiting for a design for a major commission from his friend Holbein. When it fails to appear, he sends his clerk to the German’s house, where he finds the artist’s assistant butchered and Holbein’s sons and their nurse beaten. The clerk is accused by a corrupt constable of the attack and Treviot’s only way to prove his innocence is to find Holbein and discover why the artist fled – and who from.

That leads him into a quicksand of religious and political intrigue where powerful factions compete for the ear of an increasingly sick and unstable king, where international politics are mixed with greed, ambition and treachery among the highest in the land – and where intimidation and murder are often the first resort of those battling for England’s future.

Exciting enough? You bet! Fast moving? Always! Complicated? About as much as the events it describes!

Yet in all Treviot’s dealings, doubts and dangers, Wilson never forgets that his hero is just an ordinary, if privileged, young man and it is this sheer humanity which makes this book and its predecessor so outstanding. Read it for a first-class account of a formative period of English history, as a revelatory account of Tudor life and as an excellet mystery action thriller.