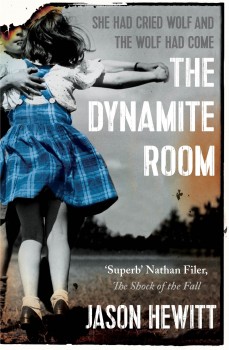 In 1940, an 11-year old girl returns to her home on the Suffolk coast to find the area deserted, and is alarmed when a German soldier arrives, who seems to know all about her.

It’s 1940 and Lydia is unhappy in Wales to where she has been evacuated. She cons her way by train back to her village on the Suffolk coast, but finds it empty. At her house there is no sign of her parents, or of her brother Archie, but she has barely taken up residence before Heiden, a German soldier, arrives.

Heiden claims he is the spearhead of an invasion force, but as the days pass, 11-year-old Lydia begins to doubt. She is also bemused by Heiden’s knowledge about her and her family. Both are trapped in the shuttered house, sweltering under a hot summer sun, each with their own thoughts about the steps that led them to their current predicament.

Heiden’s war has not gone well. He is separated from his girlfriend Eva, a musician like himself who took a job at an asylum for the mentally ill. He has had several postings, but the worst was in Norway, where his unit was decimated and the remnants forced to endure extreme cold. It is only at the end of the book that we find how he has ended up in England.

Lydia is on the brink of maturity, half the time reasoning like an adult and half still thinking like a child. She wishes her family an early return, but in practice she knows this is unlikely: her father and brother are in the services and her mother has obviously been evacuated, possibly because of the risk of invasion.

The author reveals the stories of Heiden and Lydia in small doses, various episodes being continually returned to as they revolve in the minds of the two protagonists. Key facts are released drip by drip, so that for instance it is page 250 before the location is identified and Heiden’s local knowledge is explained.

Jason Hewitt’s skill in keeping the reader guessing as to what is going on is impressive, and much remains obscure until fairly late on, making the reader work for their money. But the tendency to break off every time a back story gets near a revelation can be irritating, especially when the memories revealed (especially Lydia’s) are less than earth-shattering.

Despite that, the book creates a very believable picture of the two characters, and sustains the claustrophobic atmosphere in the house that they share with a wealth of period detail. Heiden’s attempt to adjust to Lydia’s unexpected appearance and accommodate her in his plans does hold interest, and the ending has the inevitability of a true tragedy.