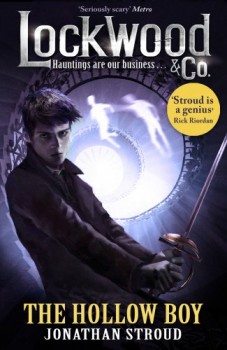 London is in the grip of a terrifying plague of ghosts, stretching all the psychic investigation agencies – including Lockwood & Co – to breaking point.

Jonathan Stroud’s brilliant – and decidedly ramshackle – team of psychic investigators are back for their third outing in Lockwood & Co: The Hollow Boy.

London, specifically the wealthy area of Chelsea, is in the grip of the biggest outbreak of ghosts since the Visitors, as they’re euphemistically known as, first started to appear 50 years ago.

Adults can’t see ghosts, but they can certainly be killed by them, and have to rely on teams of trained child agents, usually run by older handlers, to keep them safe from a multitude of things that do a lot more than just go bump in the night. There are Apparitions, Changes, Cold Maidens, Fetches and the delightfully named Raw-bones (a figure straight out of the grisly British folklore tradition), all of which are more than capable of wreaking havoc on the streets and off them.

The Visitors can be combated by such diverse protection as iron-filings, salt and lavender, all wielded to good effect by teams of children who’ve done their growing up on the frontline against the visitors rather than in the safe environment of classrooms. These highly-trained agents carry rapiers as well as salt-guns in a hugely-entertaining and distinctly steampunk blend of Victoriana and the present day.

Narrator Lucy Carlyle has to contend with the enigmatic and dangerous Anthony Lockwood and his sidekick, George Cubbins, whose specialist subjects are research and slobbing-out. Their shared house is a mess and they’re run off their feet, but Lucy doesn’t exactly welcome the entrance of newcomer Holly Munro, their new secretary, taken on by Lockwood during Lucy’s brief absence on holiday. Holly is entirely too organised, and very definitely too superciliously perfect, for Lucy’s liking. But – naturally – the boys fawn over her.

As the Chelsea outbreak worsens by the day, Lockwood & Co have to work with arch-rival Quill Kipps and his team from the Fittes Agency, one of London’s largest and most prestigious firms of psychic investigators, to find and neutralise the Source of the problem. Their alliance takes them deep into the heart of a long-buried evil and it’s by no means certain that they’ll escape unscathed.

There’s a very real sense of menace suffusing Jonathan Stroud’s books. Children can – and do – die, and there’s absolutely no guarantee of a happy ending for any of his characters. The descriptions of the various supernatural manifestations are vivid and hair-raising. His characters are well-drawn and engaging, and he does an excellent job with one of my favourite tropes, that of antagonists forced to work together, as the two teams of agents circle each other warily, like dogs with their hackles up.

The dialogue fizzes like the salt-bombs that get lobbed at the Visitors, especially the exchanges between Lucy and the highly irritating and unpleasant ghostly skull she carries around in a backpack, an unlikely and wholly untrustworthy ally. The action gallops from page to page and there are times that you’ll wish you were reading from the safety of behind the sofa.

This is exceptionally stylish young adult urban fantasy, with depth, humour and bags of originality.