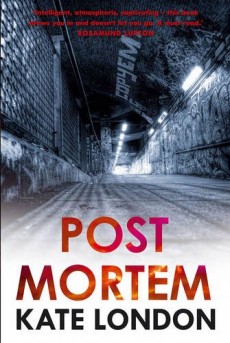 A young girl and a long-serving police officer fall to their deaths from a London tower block. The only witnesses are a traumatised child and Lizzie Griffiths, a rookie cop.

Detective Sergeant Sarah Collins of the Metropolitan Police’s Directorate of Special Investigations – the cops who investigate other cops – is one of the first on the scene when Hadley Matthews, a long-serving police officer only three years from retirement, falls to his death from the top of a London tower block alongside a teenage girl. Left behind on top of the roof are rookie cop, Lizzie Griffiths and a traumatised young boy.

The investigation into the deaths is almost immediately complicated when Lizzie Griffiths goes on the run for no apparent reason, leaving Sarah Collins and her colleague, DC Steve Bradshaw, to pick through the wreckage of three lives and uncover whatever it is that Lizzie is running from.

Post Mortem, a strong debut from former police office Kate London, makes a refreshing change in a genre that usually goes a long way to avoid any hint of the mundane. There are no tortured and tortuous back stories, no serial killers competing to see who can kill in the most unpleasant and outlandish ways, no plots so convoluted that they make your brain feel like it’s been tied into a knot of positively Gordian proportions. Instead, this is a story of real people with real pressures. There’s nothing glamorous about these cops. They’re all over-worked, over-tired and actually quite ordinary.

Hadley Matthews is one of those coppers destined to leave the job still a uniformed constable, his only ambition seemingly to serve his time and collect his pension. He’s overweight, more than a little cynical, and occasionally prepared to bend the rules to get a result. Lizzie Griffiths is bright, ambitious and far more inclined to see things in black and white, so when she’s asked to back Hadley up against a complaint of racism, she’s not keen to get involved, especially when she wasn’t actually present during the exchange in question, but pressure is mounting on Lizzie to protect her colleague’s back. After all, that’s what the job’s about, isn’t it?

It’s Sarah Collins’ job to ferret out the facts that someone would prefer to keep covered up and at times that forces her into the role of a somewhat unsympathetic antagonist. It’s easy to sympathise with someone who possibly says something in the heat of the moment that they regret later, and equally easy to empathise with someone cajoled into telling a small lie to help out a friend, especially when under pressure from a more senior colleague. But it’s less easy to stand alongside someone whose job it is to investigate fellow officers who spend all day, every day on the front line of police work. And there lies the essential tension at the heart of this deceptively simple yet extremely powerful and absorbing story.

Post Mortem explores questions of trust, skilfully weaving past events with the story of Lizzie’s desperate attempts to evade those searching for her, bringing two timelines together in a tragic, horribly inevitable collision.