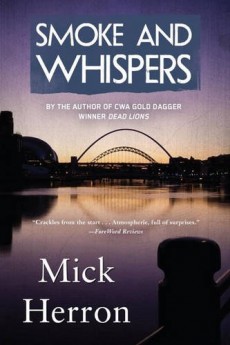 Sarah Tucker finds out from the internet that the body of her friend, Zoe Boehm, has been discovered floating in the Tyne. She is asked by the local police to go to Newcastle and make a formal identification.

Smoke and Whispers opens with the discovery of a woman’s body in the river Tyne. The police find identification on the body indicating that her name was Zoe Boehm and that she was a private investigator. Sarah Tucker is a long-time friend of Zoe’s. In fact, she is much more than that because Zoe had saved her life and, although they didn’t keep in regular touch, she feels a responsibility towards her when she hears the news of her death on the internet.

Accordingly, she immediately contacts the Newcastle police and agrees to go there to make a formal identification. She had had a postcard from Zoe saying that she was staying in a ‘mausoleum’ called the Bolbec Hotel – a description with which Sarah instantly agrees when she sets foot in it. Having originally been rather a grand place, it is now tired, run down and, according to Barry, the friendly barman, on the point of closure. So Sarah is surprised to find that a conference of businessmen and potential investors is being held, the foremost of them being millionaire Gerard Inchon, an old acquaintance of Sarah and Zoe.

When Sarah sees the body it is only with some difficulty that she identifies it as Zoe. It is pale and bloated from being in the river but the resemblance to Zoe is such that she has reluctantly to conclude that it is her friend. When the police tell her that it is definitely a case of murder she feels that she has to stay and do something, although she has no idea of precisely what.

Sarah remembers, however, that Zoe had felt she was being pursued by a man who she knew to be guilty of the murder of two women and somehow she feels that this man is involved. She then becomes suspicious of Gerard, whose appearance in Newcastle at this precise time is, perhaps, too much of a coincidence. And who were the two men – one of them very odd - to whom she had been introduced?

Gradually, and very skilfully, Herron develops his plot from this point and Sarah begins to put together the story of what has happened. The dramatic incidents that follow seem to arise naturally and there is nothing that the reader finds difficulty in believing. Part of the reason for this is the way in which Sarah is presented. She is clearly very intelligent and witty as her conversational one-liners that show. On the other hand, she realises that she is a woman with little to protect her if her suspicions are correct and she is frequently afraid. This fear, however, doesn’t prevent her from doing what she thinks needs to be done to establish the truth and, as she does that, the tension mounts. Too often a cliché, the ‘I simply couldn’t put it down’ comment certainly applies here.

Soho Press has reissued this Mick Herron novel, originally published in 2009. This decision was probably reached following the success of the Slough House novels, one of which - Dead Lions - won the Crime Writer Association’s 2013 Goldsboro Gold Dagger Award.

Although real success only came to Mick Herron with the Slough House series, it is obvious from this book that there is a lot to be gained from reading some of his earlier work and this would be an appropriate place to begin.