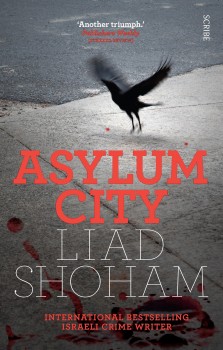 When a young volunteer at a Tel Aviv immigrant centre is murdered, the confession by an Eritrean is almost universally seen as satisfactory. But Anat Nachmias of the Special Investigations Unit thinks there is more to the story.

The Organisation for Migrant Aid struggles to cope with the number of refugees arriving in Israel, especially from Ethiopia and Eritrea. Michal Poleg, a particularly vociferous volunteer at the OMA, is found dead at her flat, to the particular distress of co-worker Itai Fisher, who ignored her telephone calls for assistance.

Investigating officer Anat Nachmias, acting head of the Special Investigations Unit while her boss is on holiday, hears from Poleg’s neighbour that an African was seen leaving the flat around the time of her death. The man in question, Gabriel, a friend of Poleg, is soon in custody, and offers a confession. Nachmias finds several aspects unconvincing, however, and despite her colleagues’ view that the case is solved, insists on exploring other lines of enquiry.

Fruitful directions include ambitious Assistant State Prosecutor Yariv Ninio, an old flame of Poleg, who has accused him of ignoring research confirming that Eritreans risk death when he presses in court for their forcible return. Ninio visited Poleg’s flat the night of her death, much the worse for alcohol, and returned home bruised and bloody, but cannot recall what happened that night.

‘The Banker’ and his boss Faro, who offer exploitative financial services, would also have an interest in stopping her mouth permanently, after their assault on Poleg merely stirred things up. There is also Faro’s associate ‘The General’, a mysterious figure who seems to be intimately involved with the abuse of immigrants.

The story is related from the perspective mainly of these key named persons: Policewoman Anat, OMA worker Itai, immigrants Gabriel and his sister Liddie, lawyer Yariv, and crime boss Faro and his henchmen. Through their thoughts we come to understand not only the death of Michal, but also how the system works generally for those escaping a brutal repressive regime like that of Eritrea.

Much of it is depressingly familiar. Desperation triggers the exodus, Bedouins taking travellers across Sudan and the Sinai take every opportunity to rape and pillage, most Israelis fear Africans for their skin colour, and it is always a political vote-winner to urge their harsh treatment and return. Israel rarely grants travel documents to refugees; other countries have no assurance that a refugee arriving via Israel will be permitted to return there, which sends ‘the message that Israel was like a prison: once you were in, you couldn’t get out.’

Despite this pretty hard look at the realities of life in the Middle East, the book is not entirely gloomy. Amat is a feisty and persistent protagonist, despite a misogynist streak in the TA police, and hints of a romance between her and Itai are amusing if only because of their shared difficulty with typical Jewish mothers.