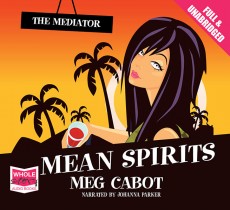 Teenager Suze Simon can see and hear ghosts. The downside to that is that they can – and sometimes do – try to kill her.

Mean Spirits, first published as Reunion under Meg Cabot’s former pseudonym of Jenny Carroll, is the third in the series featuring the ghost-busting escapades of teenager Susannah – Suze – Simon.

Suze doesn’t take nonsense from anyone. Not the three stepbrothers she’s acquired since her mum’s marriage and move to Carmel, California, or any of the various ghosts she comes across in her role as a mediator, and certainly not from Jesse de Silva, the dead guy – and hottest ghost in history – who just happens to be living in her bedroom.

As a mediator, Suze is meant to help ghosts pass on to whatever awaits them next, but some ghosts are determined not to be helped. Into that category comes a group of teenagers killed in a car-crash on the rugged Californian coast. Their car went through the barrier, dropping its four occupants into the sea.

The four, nicknamed the RLS Angels, all leaders in sports or social groups at Robert Louis Stevenson High School, turn out to be distinctly less angelic in death than in life. They’re out to cause trouble and get revenge, and it’s up to Suze to stop them, even though dealing with a bunch of stroppy ghosts is a long way down on her agenda, as her friend Gina from New York has come to visit, and Suze would rather hang out with her than deal with the hang-ups of a group of kids who don’t know when to do everyone else a favour and just stay dead.

The ghosts blame Suze’s classmate, quiet, geeky Michael Meducci for their deaths, and they want to even the score. Suze involves fellow mediator and college principal, Father Dominic, as well as Jesse, in her attempt to keep Michael safe from the vengeful ‘Angels’, but a night time trip to the beach to reason with them – in which Suze is more preoccupied with snakes than ghosts – turns up some surprising information, putting a rather different slant on events.

As ever, Suze is a lively and engaging narrator, ably assisted by the pitch-perfect voice of Johanna Parker. Suze’s new family are always good value, as is newly-introduced friend Gina, who’s tough, sassy and great fun. The books all stand alone very well, so it’s certainly not too late to acquaint yourself with the dead and not-so-dead of California. The books are an excellent blend of humour and excitement, with a vein of romance running through as Suze starts to realise that she’s now thinking of Jesse not just as an inconvenient and definitely dead roommate, but as something else entirely.

I’m enjoying the series on audio every bit as much as I enjoyed them in print.