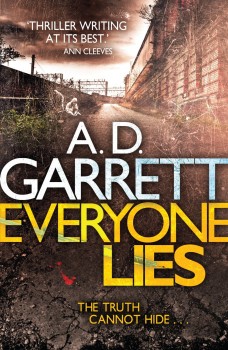 When drug addicts start turning up dead, the police don’t seem to be taking much notice until a minor celebrity dies, then the case gets handed to DI Kate Simms, who ends up asking for help from the man who ruined her career five years ago.

Everyone Lies is the beginning of a series by writing partnership between thriller writer Margaret Murphy and Professor Dave Barclay, former Head of Physical Evidence at the UK National Crime and Operations Faculty. The collaboration seems to be a very successful one, combining a police procedural with forensic details that are well-explained without turning into information dumps.

But there are times when the book feels like a later book in a series rather than the opener, as the back story between the two main characters casts a long shadow on the book, but is little more than hinted at, particularly in the early stages, rather than explained. Whilst this adds something to a feeling of intrigue, at the same time it also contributes to a feeling of frustration.

DI Kate Simms is struggling to shake off the effects of a case that set her career back considerably. Professor Nick Fennimore was the man who caused her problems. He’s a former crime scene officer and toxicology specialist now lecturing at Aberdeen University. It was the disappearance of his wife and daughter five years ago that led to Simms’ fall from grace when she was found to be allowing him access to the case files even when he was a suspect in the investigation.

When drug addicts start dying of overdoses, no one is particular surprised. That sort of death is common, but the police are forced to take more notice when one of the dead users turns out to be a minor television celebrity by the name of StayC. Her sister was with her when she took the drugs and she is adamant that her symptoms were not simply those of an overdose.

With the media in full cry, the case is handed to Simms. When another overdose victim is found, badly beaten, her body mutilated to remove any identifying features, Simms realises that there is more going on than a case of a consignment heroin that’s been mixed too heavily with other substances. This woman has very definitely been murdered.

Simms turns for help to Nick Fennimore, even though his involvement will cause even more problems for her if it becomes known. The two make a convincing partnership, although the character of Fennimore seems the more well developed of the two, whereas Simms falls more into the standard stereotype of a woman struggling to balance her career with her home life as a wife and the mother of a small child. Beyond that core conflict, she doesn’t really come to life, although there is plenty of room for her to shine.

The technical details in the book are well-handled and don’t dominate the story, adding a layer of verisimilitude to what might otherwise have been little more than a standard crime story. It’s a good combination and will hopefully be developed further in what is clearly the start of a new series. Fans of Jeffrey Deaver’s Lincoln Rhyme series will feel at home with Everyone Lies.