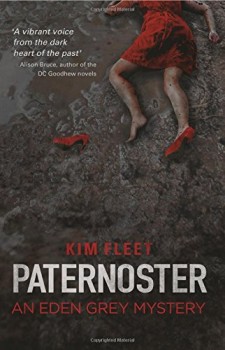 When a client mysteriously dies, private investigator Eden Grey is plunged into a web of evil while her own past threatens to come back to haunt her.

Kim Fleet has found an ingenious way of disposing of her victims – the bright red and black bean often used to make rosaries. The so-called Paternoster Pea is the seed of the tropical plant Abrus precatorius and contains abrin, one of the most powerful toxins known. The hard-shelled bean is still used to make religious artefacts, ethnic-style bracelets and necklaces. Not long ago the tourist attraction the Eden Project recalled bracelets made with the seeds!

That brief lesson in toxicology not only explains the title of this introduction to the life of private eye Eden Grey, but also outlines the story’s theme – that evil, like history, repeats itself with greed always its starting point. In this clever time-slip novel, Fleet interweave two storylines, one past, the other present, to give a fast-moving plot real depth.

In 1795 high-class prostitute Rachel Lovett is forced to flee the exotic life of George III’s London for a bucolic existence in a Cheltenham brothel.

The newly-built Greville House estate seems an ideal place for her to start her hunt for a wealthy protector, but rumour suggest that there is more than just the usual debauchery there. Tunnels beneath the house lead to the sinister Paternoster Club – an offshoot of the Hellfire Clubs set up in 1718, by Philip, Duke of Wharton and made infamous by Sir Francis Dashwood’s Order of the Friars of St Francis of Wycombe.

Rich young rakes and ‘persons of quality’, often involved in politics, used these clubs for debauched sexual and immoral acts, including, it was said, human sacrifice!

In 2015 Grey, a former undercover customs special investigator, is rebuilding her life under the Witness Protection Programme after an operation goes terrifyingly wrong, leaving her close to death.

Now known by her new name and working as a private investigator, the mystery death of one of her clients leads to a web of corruption, human trafficking and murder. And the discovery of two centuries-old skeletons in the grounds of an exclusive Cheltenham school turns out to be of greater relevance than she realises. Together with her OCD anthropologist boyfriend she tries to fit the pieces of the jigsaw together – as her own past returns to haunt her.

Grey is a strong, complex and fascinating character and the pace of an all-action story, stripped of any of the usual superfluous padding, will keep you reading to the end. You may pick up a couple of minor weaknesses, such as why a man convicted of running guns, grenades and anti-aircraft weapons is apparently not in a high security prison and how this same man could penetrate one of the best protection programmes in the world from inside a jail?

But to convict on that evidence alone is just carping. Social anthropologist, teacher and prolific short story writer Fleet has found a tough, determined and likeable new heroine and if this is to be the start of a series, it’s well worth waiting for Eden Grey’s next case.