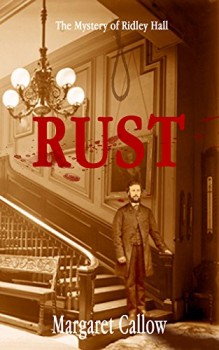 From childhood, Alfred Hastings Rust has an obsession with owning Ridley Hall, a Victorian mansion. Driven by this and greed, he cheats, lies and betrays his way towards his goal.

In 1849, around 20,000 people witnessed the public execution of James Bloomfield Rush, one of the last men hung at Norwich Castle, for the double murder of the Recorder of Norwich and his son. The case was so notorious, special trains were arranged to bring spectators – including Charles Dickens – from London. A waxwork of the killer was displayed in the Chamber of Horrors at Madame Tussauds for more than a hundred years until finally removed in 1971.

Margaret Callow has taken this infamous crime as the basis for her dark and grim tale of obsession, greed, cruelty and murder set against the bleak Norfolk countryside and the crowded and mean streets of Victorian London.

We follow the life of her anti-hero, Alfred Hastings Rust, from a manipulative and cruel little boy to a thoroughly nasty man – a vain, extravagant bully with a taste for the sordid, obsessed by riches and with owning the Ridley Hall estate and prepared to cheat, lie and even kill to fulfil that dream.

Rust is a complete psychotic contradiction. He also possesses charm and considerable ability and planning skills – but not enough to realise where his actions are leading him.

The illegitimate son of a wealthy Norfolk squirachical father who abandoned his pregnant fiancee for another woman, he resents his quiet and business-oriented stepfather whose acceptance he craves and is spoilt by his mother.

The young Alfred is resourceful and precocious. He quickly learns that weakness in others can be exploited for gain and as he matures his ruthless drive, introspection, and an ability for sudden changes of attitude see him grow into a determined and dangerous adult. He deploys all his charm to attract a well-off young wife, then steals her dowry, bullies her and finally betrays her, first with a London child whore, then with a mistress.

But for all his cunning and plotting, Rust can never quite stay ahead of the game as his extravagances force him into more and more desperate measures.

This is hardly an action-packed thriller, but Rust’s ever more elaborate plots will keep you riveted – if at the same time revolted!

And Callow has a rare skill with marshalling the English language. Her descriptions of the Norfolk countryside bring it to life and her characters, although sometimes sketchy, are realistic enough and serve to focus attention on the vile Rust. Her historical research is immaculate and her depiction of Victorian country life among the squireachy and their tenant farmers is observant and convincing.

This is never an easy read, mainly because the central character of Rush/Rust is so relentlessly nasty. But cleverly plotted, brilliantly written and totally compulsive, this dark portrait of a psychopath is well worth the effort.