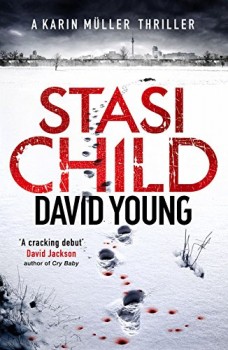 The death of a young girl close to the Berlin Wall presents some unusual features, and Stasi involvement is likely to mean trouble, especially for the police officer in charge, Oberleutnant Karin Muller.

On a cold day in February 1975, Oberleutnant Karin Muller is called in when a body is found, that of a girl apparently shot after crossing the Berlin Wall from the West. It soon becomes evident, however, that the death is not what it seems, and that considerable trouble has been taken to conceal the identity of the victim.

A senior Stasi officer, Jager, is on scene when Muller arrives, but unusually seems content to allow Muller to take the lead in the investigation. He insists nonetheless on being kept informed of every development in the case. Muller and her deputy, Tilsner, suspect that they are being used and that involvement is unlikely to do them any favours, but they have no way of getting out of the case.

Intervening chapters take us back nine months in time to the Jugendwerkhof Prora Ost, Rugen Island, in East Germany, where teenager Irma Behrendt describes in the first person the harsh regime meted out to her and other ‘disruptive’ elements. Her friend Beate cries uncontrollably after an event she won’t talk about, and Irma plans a daring escape.

This novel fully reflects the nastier aspects of East Germany in the 40+ years following the war. As only fully revealed by documents released after Germany was reunited, the Stasi was a surprisingly pervasive organisation, controlling huge numbers of informers. Here they permeate society at all levels, and are shown willing and able to kidnap, imprison and torture on the flimsiest of evidence.

Muller makes a feisty protagonist despite the difficulties under which she labours, which are several. Her husband Gottfried has been photographed meeting a dissident priest, and is snatched off the street to put her under pressure. She herself has been snapped in a compromising position with her subordinate Tilsner. Tilsner seems a little too friendly with Jager, and may be passing on information. Under it all she still harbours fear of the man who assaulted her when at training school, a man with whom the case brings her back into contact.

As the story progresses, the two story threads are gradually drawn together, and being privy to Irma’s story we understand the connection ahead of Muller and her colleagues. Despite her many difficulties, Muller makes progress and the tale culminates in a dramatic chase.

The tension created when a perceptive and dedicated investigator operates within a brutal and broken system can create great fiction, as with Martin Cruz Smith’s Arcady Renko novels. Stasi Child is not quite up to that standard yet, but there is plenty here for those who enjoy tales set back in the USSR.