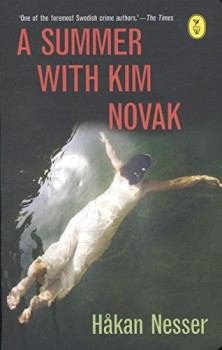 A Summer With Kim Novak

Two teenage friends, Erik and Edmund, know that the holidays will be a testing time for them, due to family circumstances. But they don’t realise that when a body is found near the summerhouse where they’re staying, their lives will be changed for ever.

Not all Scandinavian crime fiction is gory and gloomy; it can also be lyrical and delicate, soaked in sunshine and surrounded by beautiful welcoming nature, yet with a touch of suspense gently simmering underneath idyllic surface. Especially when it’s written by Håkan Nesser, one of the Swedish masters of Nordic Noir.

Nesser, author of many novels, and creator of two separate successful series of Inspector Van Veeteren and Inspector Gunnar Barbarotti respectively, is a brilliant storyteller and his use of language, and its poetry, is breath-taking.

It’s 1962. Erik’s mother is dying of cancer in hospital. Edmund’s mother is battling with alcoholism. Their fathers work as guards in the local prison, and decide that the boys should spend their summer holidays together. It’s going to be a difficult summer…

So 14-year-old Erik and Edmund take their bicycles and books and move for the next few weeks to an old decaying family house, by a lake deep in the forest. The boys have a great time: cycling, swimming, reading, talking about detective TV shows, and cooking basic meals, while Erik’s grown-up brother Henry keeps writing his first book about life. They became very close and completely understand each other, while fantasising in tandem about a stunning young school teacher Ewa Kaludis, who looks exactly like the American actress Kim Novak.

When unexpectedly the stunning blonde Ewa appears at the hidden lake to see Henry, they can’t believe their eyes. They also try to deal with issues which are too difficult to talk about, or too painful to share. Edmund remembers his abusive biological father. Erik knows his mother will die soon. But it is what it is, as they repeat the phrases and expressions adopted from the adult conversations.

Using these words allows them to deal with own feelings, sexual awakening, and most of all the unfairness of life. They might appear meaningless yet they are a helpful tool to hide from despair and loneliness. Same old same old. Life is a mystery ... Erik especially has a list of difficult subjects that he tries to avoid: Cancer-Treblinka-Love-F…-Death. The rich psychological portraits of two lonely boys facing huge adult dilemmas are drawn tenderly and subtly.

And then the Incident happens, of which both boys have had a strong foreboding. When a body is found near the summerhouse the happiness is shattered and everybody gets questioned by the police. Nothing is ever the same.  The consequences of the killing send shock waves through the lives of Erik and Edmund, and their families.

Twenty five years later, Erik comes across a newspaper article about unsolved crimes and memories of that fateful summer come flooding in, even though he has tried to repress them.

This quite nostalgic book was originally published in 1998 as Kim Novak Never Swam in Genesaret's Lake, and then the Swedish film version was made in 2005. The English translation by Saskia Vogel is excellent, and I was moved between tears and laughter while reading the story of the truly unforgettable summer.