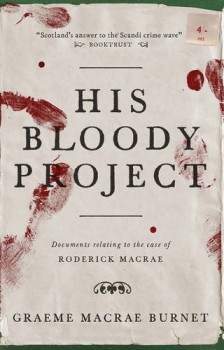 A triple murder in a remote Scottish village leads a 17-year-old to trial. He admits the killings, but motive remains the question, and his fate is unclear.

This assured and ingenious novel, based on a sensational and dramatic trial at Inverness in 1869, is a deeply imagined tale of persecution, tragedy, revenge and courtroom drama – noir historical fiction at its best.

While researching his own family history, the author discovered the story of Roderick John Macrae, a 17-year-old from the crofter settlement of Culduie, Wester Ross, who committed a brutal triple murder. While awaiting trial, the boy wrote a detailed account of his life – the first time this full version has been seen – earlier published extracts concentrated solely on the more disturbing and sensationalist parts.

Macrae gives a starkly unromanticised account of the life of a 19th-century crofter. The known outcome lends his story a sense of foreboding. This narrative is followed by an extract from the ‘memoirs’ of the psychiatrist who examined him and an account of the trial using newspaper reports.

These expose inconsistencies and omissions in Macrae’s story, pointing up not just the unreliability of individual witnesses, but also the complexity of the law’s duty in determining if an accused is insane or just evil. Those are the bare facts. It is Burnet’s masterful setting of them in their historical background that makes this awful tragedy so inevitable and compelling – and will leave readers wondering if the jury finally reached the correct conclusion.

As a piece of social history, this powerful psychological drama buries once and for all the myth of the romantic Highlands. Life for the crofters was often short, grim and brutal. Oppressed and exploited by the major landowners, their factors and sub-agents, who regarded them as almost sub-human, their traditional clan structure destroyed, they had become what was expected of them to the point that any exception was regarded as remarkable and noteworthy.

Burnet captures this brilliantly in his characterisation. The stern, unbending attitude of the Kirk – ‘The records of the presbytery.....exhibit a picture of wildness, ferocity and gross indulgence consistent with a state of savagism’ which their fierce God was there only to punish; the pompous, self-satisfied beliefs of psychiatrist James Bruce Thomson, resident surgeon at the General Prison (asylum) in Perth – whose view of eugenics would have gone down well with the Nazis – are an indictment of the age.

This superbly written book leaves unanswered questions. Did Macrae’s defence lawyer, the well-intentioned but out-of-his-depth Andrew Sinclair, miss a vital point, failing to link his sister’s abuse with the mutilation of one of the victims? Was the strange teenager genuinely disturbed?

Burnet’s first novel, The Disappearance of Adele Bedeau, established a reputation for smart literary mystery writing. This compelling and disturbing novel only enhances that and marks him as a name to watch.