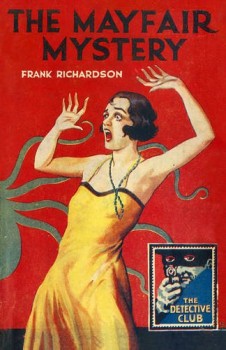 The body of a society doctor is discovered by his valet who hurries to inform a lifelong friend of the dead man. They return to find the body gone.

This brilliant and witty satirical send-up of London society in the early years of the 20th century involves the theft of a gold watch from an Edwardian version of Simon Cowell. The story features a disappearing corpse, a supernatural theory, and a genuinely surprising finale.

Author Frank Richardson, an indifferent barrister turned playwright, but an outstanding caricaturist and satirical novelist, cut his own throat in 1917 aged just 46. The cause of his death was depression, fears over impending blindness and ‘alcoholic excess’ – a sad epitaph for a writer whose comedy entertained a devoted horde of readers on both sides of the Atlantic.

The target of many of his jokes was the fashion of extravagant facial hair for men. He is credited with coining the expression ‘face fungus’ – and whiskers, moustaches and beards figure prominently in this story. He wrote himself into the book – twice – as the facial hair-obsessed ‘obscure novelist’ Frederick Robinson and the charming, but ‘versatily incompetent’ failure Lampson Lake!

The body of a brilliant and wealthy society doctor is discovered by his valet who hurries to inform a lifelong friend of the dead man of the tragedy. They return to find the body gone. The mystery deepens as the doctor reappears some days later, very much alive and about to achieve his greatest success which will bring him immortal fame.

At the same time, his friend, an eminent, unmarried King’s Counsel, meets the woman he has waited for all his life, but is baffled by her frequent disappearances. His attempts to solve either mystery, hampered, rather than assisted, by some of the most incompetent coppers ever to appear in a literary work, seem to lead nowhere.

But it is the setting, the extravaganza, pompousness and sheer trivial self-indulgence of London’s upper classes – their balls, clubs, theatres, milliners and social snobbery – which makes this story such a scintillating read.

Those who want their crime gritty will be wasting their time with this new edition, which comes with a helpful introduction by David Brawn, but those seeking a clever, witty entertainment will even forgive its totally unbelievable conclusion!