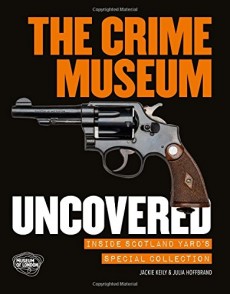 Take a trip behind the scenes of the Metropolitan Police’s Crime Museum.

In October 2015, the Museum of London launched a major display of objects from the Metropolitan Police’s Crime Museum, and a book to accompany the exhibition has been produced. The Crime Museum was founded in the mid-1870s as a result of a requirement being brought in to retain prisoners’ property until their release, which led to the setting up of a store for property seized during an investigation.

The museum and its contents have never been open to the general public, and although the collection is primarily used as a training resource for police officers, it has seen a steady stream of visitors over the years, all of whom have signed the visitors’ books, which cover most of its 140 year existence. Six hundred objects were chosen out of approximately 2,000, including some of the very earliest items in the collection.

The book starts with an informative introduction by its authors, Jackie Kelly, Curator of Archaeological Collections and Julia Hoffman, Curator of Social and Working History, both from the Museum of London. This is followed by a timeline of the early years of the Metropolitan Police, starting with its formation in 1829, under the authority of the then Home Secretary, Robert Peel, from whom the nicknames ‘peelers’ and ‘bobbies’ are derived. This centralised police force soon grew to number 3,000 men, with its detective branch starting in 1942. The Crime Museum was founded in 1875.

The early days of the crime museum are illustrated by its door sign from 1894, the first of its many visitors’ books and its original catalogues. These are followed by a somewhat gruesome display of death masks made after executions at Newgate Prison, some for phrenological purposes, to study the shape of an offender’s head. Others were made as curios. There’s also a display of ropes used in public hangings.

The book manages to perfectly capture the impact of these and many other grisly items, as the reader – and the visitor to the exhibition – is taken through an endlessly fascinating selection of items connected to some of the most well-known crimes of the last 140 years, as well as many other, lesser-known cases.

Both the book and the exhibition focus strongly on the victims of crime, pointing out that while just about everyone knows the name Jack the Ripper, far fewer can name any of his victims. Also addressed are themes such as offensive and disguised weapons, drugs, firearms, abortion, capital punishment, terrorism, public protest, espionage and the Cold War, burglary and robbery, counterfeiting and forgery and finally police procedures.

The treatment of individual crimes and these wider themes is equally successful. The text is well-written and beautifully illustrated throughout. The layout is visually attractive and extremely engaging, even when dealing with some thoroughly unsettling material. The victims are never forgotten and the authors avoid sensationalism. The presentation is factual and informative, echoing that of the exhibition itself.

This is an impressive and invaluable companion piece to a ground-breaking exhibition. If you’ve seen the exhibition, the book is a superb complement to it, and if you haven’t, it stands alone as a testament to the work of the Metropolitan Police and the ever-fascinating developments in policing and forensic science.