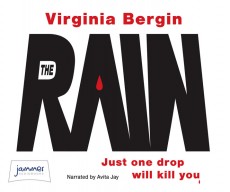 ‘It’s in the rain!’ And if the rain touches you, you’re dead.

One minute, the worst thing 16-year-old Ruby Morris has to worry about is a bad case of stubble rash after her first proper snog with Caspar McCloud in a hot tub at a party. The next minute, everything has changed and Ruby – and everyone else on the planet – is worrying about how to survive the killer rain that’s started to fall.

If even so much as a drop of rain lands on your skin, you’ve had it. You start bleeding, internally and externally, and there’s nothing that can be done to save you. Panicked announcements on radio and television tell you to stay indoors and stay calm, but it’s not easy to stay calm when you feel like you’re dying of thirst but you daren’t touch anything that comes out of the taps because that’s contaminated too. ‘It’s in the rain!’ Water is now your enemy, not your friend, and it’s only safe if it comes out of a bottle. But even that can’t entirely be trusted.

With precious resources now scarce, Ruby holes up in her house with her stepfather, Simon. They’re not alone, though. They’ve still got the bodies of Ruby’s mum and baby brother upstairs as well. But as long as they don’t touch them, dead bodies are pretty safe. It’s the live ones they’ve got to worry about.

The Rain is a tense, frightening look at a grim post-apocalyptic world where it’s safer to presume that everyone is your enemy than it is to let your guard down. Ruby is an engaging narrator, although the author’s decision to redact all swearwords and substitute the word ‘butterfly’ instead is both coy and irritating. Would a few swearwords really have been more unpalatable than descriptions of decomposing corpses?

In The Rain, dead bodies litter the streets and houses of a world that’s very quickly turning into a violent place where no one can be trusted. Against her better judgement, Ruby teams up with the school geek, Darius Spratt, and a young girl turned mute by the horror of watching her parents die. Ruby is determined to get to London to find her dad and her brother, and if Darius Spratt and The Kid want to tag along, then they’d better not get in her way.

Ruby is headstrong, hardly ever stopping to think or plan, but she manages to survive, and in a world dominated by killer rain, that’s all that matters. Avita Jay throws herself into Ruby’s narration with an easy confidence, coming over wholly convincingly as a teenage girl who isn’t yet ready to give up nice clothes and make-up. She’s somewhat nasal as awkward, practical, loyal Darius Spratt but that doesn’t detract from a sharp-edged, gripping story that pulled me along with it through some deeply uncomfortable territory.