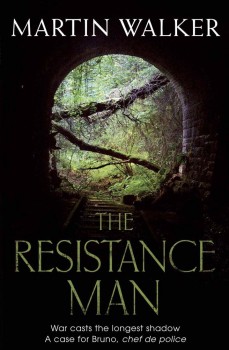 Against a backdrop of rural France, Inspector Bruno Courrèges, Chef de Police in St Denis, has to deal with a series of burglaries that culminates in a vicious murder.

The small town of St Denis provides a perfect backdrop for Martin Walker’s series starring Inspector Bruno Courrèges, Chef de Police, returning for the sixth time in The Resistance Man. Perigord is a region of France where the war still casts a long shadow.

In my village, on the edge of Bruno’s stamping ground, there is still an annual service of remembrance for three villagers murdered by the occupying German forces on suspicion of cooperating with the Resistance, and there are always fresh, well-tended flowers on their memorials, even after so long. It is not hard to believe that in St Denis, families and neighbours are still divided on the subject of the war, based on whether fathers or grandfathers fought against the Germans or collaborated with them.

It is against this background of old allegiances that Bruno is called by Father Sentout, the village priest, to the deathbed of Old Murcoing. The priest has found a cache of old, high value banknotes dating to 1944, the year of the celebrated great train robbery of Neuvic on July 26, when Resistance pulled off a daring robbery, netting an almost unimaginably huge sum of much-needed money to fund their continuing activities against the Germans.

The old man had been obsessed with the robbery, believing that he’d been cheated of his rightful share of the funds. His nephew, Paul, shared his obsession. As Murcoing was entitled to be buried with full Resistance honours, much of the arrangements fall to Bruno, but he soon has other calls on his time.

A series of burglaries at remote cottages, usually second homes, takes on a new dimension when valuable antiques and wine belonging to Englishman Jack Crimson are taken. Crimson proves to have friends in high places, and Bruno is contacted by his occasional lover, Isabelle, on behalf of the shadowy Brigadier, and Bruno is tasked with securing the return of Crimson’s stolen property. But the burglaries take a more sinister turn when another Englishman, antiques dealer Francis Fullerton, is viciously beaten so badly around the head that only DNA can conclusively identify him.

No Bruno book is complete without numerous, converging storylines, and The Resistance Man is no exception, but on this occasion I felt that Walker was never quite at ease with the homosexual aspect of Fullerton’s murder, with suspicion falling on both his current lover, theatre director Yves Valentroux, and also on Paul Murcoing, the old resistance hero’s nephew, believed to have murdered Fullerton in a jealous rage. There was something uneasy, lacking Walker’s usual deft touch, about the frequent references to ‘gays’ that left me somewhat uncomfortable. Equally heavy-handed is the attempt to ramp up some tension for Bruno when his other lover, the somewhat one-dimensional Pamela, is injured in a fall from her horse and, of course, we have the by now equally obligatory death of an animal.

For me, one of the most memorable scenes in the book is the funeral of the title character. This is beautifully described and genuinely moving, anchoring Bruno very firmly in a region where old loyalties run deep. Bruno is an inspired creation, and the region he inhabits will never be anything less than intriguing and charming in equal measure, continuously inhabited for in the region of the last 50,000 years and a source of endless fascination. I think – hope – that Walker has enough in-depth knowledge of Bruno’s haunts for there to be much mileage left in the books, despite the occasional minor misstep. But if anything happens in future to the delightful basset hound puppy, Balzac, I will definitely vote with my feet!