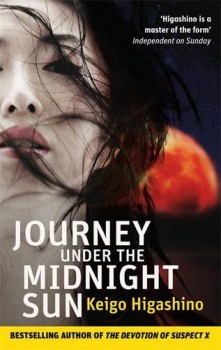 Journey Under the Midnight Sun

A pawnbroker is found murdered in an abandoned building in Osaka in 1973. Detective Sagagaki’s initial efforts fail to achieve a result, but after 19 years he is still on the trail of two young people connected to the crime.

Pawnbroker Kirihara withdraws a large sum from the bank and is then found knifed. His wife, ten-year-old son Ryo and employee Matsuura alibi each other. Kirihara is known to have been a regular visitor at the home of a woman, Fumio, and her teenage daughter Yukiho. Fumio and Terasaki, another regular visitor, fall under suspicion for a while, but again have solid alibis.

Detective Sagagaki is frustrated with the lack of progress with the case, but police resources become redirected when there seems little prospect of an arrest, especially when two of the key suspects die a few months later under what appear to be unsuspicious circumstances. Sagagaki maintains a watch, however, and certain patterns of events become evident as the years pass which cause him to become more and more certain that Ryo and Yukiho justify his interest.

After the initial investigation, during which we follow the perspective of the detective, the book charts the progress of Ryo and Yukiho through the stories of people with whom they interact. Many of these suffer from unfortunate events, but the reader is at first in doubt who is behind these happenings. As the coincidences accumulate, however, the conclusion becomes inevitable. We catch up with Sagagaki towards the close when old history is revealed and he is finally ready to take action.

This book was first published in Japan in 2003 and the popularity the author enjoys there is fully justified. The subtlety with which Higashino drops hints about the two key characters is masterful, generating uncertainty and speculation in the early chapters, giving way to horror at the vulnerability of anyone who crosses the path of the suspects as their culpability becomes more evident. By the end of the book the reader is gripped with morbid fascination as new victims drift into the firing line.

The book holds the attention despite its considerable length. The ways in which Japanese culture differs from the West come through very strongly:  the distinctive food, accommodation and attitudes to work all permeate the narrative. At the same time the motivations of most of the characters are familiar, and the book avoids the other-worldly feel of some Japanese literature. The final reveal lays bare a mainspring of psychic damage that would be very recognisable in the West.

The complexity of the story and the intricate way in which it is unfolded makes this a crime story of more than usual merit, and well deserving of critical acclaim. I will certainly be taking a look at the three other books by Higashino now published, including The Devotion of Suspect X.