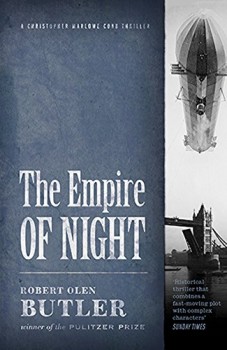 The Empire of Night

American journalist and spy Kit Cobb travels to Germany early in 1915, on the trail of an English knight suspected of working for the German cause.

American journalist and spy Kit Cobb is in Britain in 1915 under the alias Joseph Hunter, a journalist accompanying famed actress Isabel Cobb in her bilingual performances as Hamlet in both London and Berlin. The mutual attraction of Isabel and Sir Albert Stockman provides the opportunity to investigate the knight, who is believed to have German sympathies.

A patriotic event hosted by Stockman in Broadstairs enables Cobb to gain evidence that Stockman is communicating with the Germans, and playing an active role in guiding Zeppelins to the heart of London. Cobb’s superior, Trask, authorises him to follow Stockman and Isabel to Germany. On arrival he represents himself to Stockman as an expatriate German in an attempt to find out what Stockman is up to, but is only partially successful. Meanwhile, his mother is falling for the knight, and Cobb is uncertain of the outcome were her sympathies to be put to the test.

Cobb, working with a supportive German, eventually become privy to Stockman’s plans, and since these represent great danger to Britain, takes steps to thwart them. This involves careful calculation, impressive bluffing, and some exciting and dangerous activity. There are a number of twists before the story comes to a close.

Christopher Marlowe Cobb has had several previous outings, most recently in The Star of Istanbul in which he survives the sinking of the Lusitania and a visit to the Ottoman Empire. Here again his reconstruction of a world almost exactly a century old is faultless, and his attention to detail brings the narrative to life, expressed by Cobb in the first person throughout. Butler incorporates real persons into the story, such as Albert Einstein, who here has a brief walk-on part.

The author also animates the complexities of spying for someone like Cobb who is simultaneously playing several parts: journalist, American with hidden German sympathies, and later a Colonel from the German Foreign Office. The nuances of understanding are impressive: exploring Stockman’s anti-Semitism, Cobb observes: “A man who, in his ignorance, showed his prejudice...was a man who gave power to others. He showed the way his mind tended to stop working, his sensibility tended to shut out the real world. That was always useful...”

Cobb is a very cool character under prolonged pressure and while he never seems to make a mistake, he is tested by some very challenging situations. The plot has plenty of unexpected turns, and the characters of the main actors are explored in sufficient depth to make them interesting. Coupled with a well-developed historical setting, this is a book with plenty to enjoy.