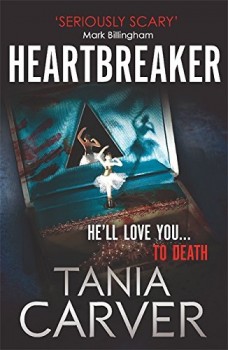 DI Phil Brennan’s marriage seems to be on the rocks and he’s deteriorating fast, losing himself in the welcoming arms of too much booze. And that’s not good when he’s got a brutal killer to track down.

Writers who use pseudonyms make me grumpy. Having got that out of the way, I’ll now admit to scuttling off at speed with the latest book in the series featuring DI Phil Brennan and his psychologist wife, Marina Esposito. Tania Carver (aka Martyn Waites) does a good line in serial killers, not normally my tipple of choice, I must admit, but I like her characters.

Hmm, maybe that’s what makes me grumpy? It seems odd to refer to the author as ‘she’ when I know perfectly well the book is written by a man. Oh well, moving swiftly on…

A killer is at work on the streets of Birmingham, targeting vulnerable women who have finally found the courage to leave their abusive partners. Gemma Adderley walked out on her violent husband, taking her seven-year-old daughter Carly with her. But then Carly is found alone and traumatised and, a few weeks later, Gemma’s body is found in a canal, with her heart ripped out.

Her husband, a man who makes a big play of having found religion, despite carrying on an affair with another woman before his wife’s disappearance, is the first and most obvious suspect. DI Brennan, struggling with the fact that his own wife has left him, taking their daughter with her, is certain he’s the killer, and starts to make some very dubious moves under the unhelpful influence of copious amounts of alcohol.

It was hard watching the normally sensible and well-grounded Brennan start to fall apart and behave like a complete idiot, risking the integrity of the investigation and putting his own job on the line. It was equally hard knowing that more women were going to die while Brennan failed to get his act together.

Carver is strong on both character and plot, although there were a few occasions when I felt that Brennan was being deliberately hit with the stupid stick for the sake of extra drama. The supporting characters are particularly well drawn, from old-style copper DS Ian Sperring, to bright-eyed and bushy-tailed newcomer Avi Patel, and smart, likeable DC Imani Oliver. They’re all real people, and what happens to them matters to me.

There are plenty of red herrings strewn around the place as both Brennan and Esposito struggle to get a handle on the case whilst trying to put their own difficulties to one side. The killer is suitably twisted but never too over the top, and the plot moves along at a reasonable pace.

If you like police procedurals, you won’t go far wrong with this. And do our crime-fighting duo settle their marital problems? That would be telling. You’ll just have to read Heartbreaker to find out.