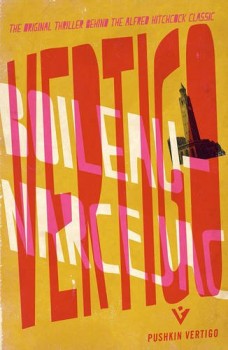 Gévigne, a married man, contacts an old friend, a former policeman, after many years.  He asks him to carry out an investigation into the behaviour of his wife, who is given to dream-like states and periods of apparent absence from the material world.

This is an English translation of a book co-written by Pierre Boileau and Thomas Narcejac in 1954. It was made famous for English and American audiences by the Hitchcock film Vertigo of 1958.  Whilst the film was regarded as possibly Hitchcock’s best, it has to be said that the book is superior.

There are two reasons for this. The first is that the film didn’t try to convey anything of Paris at the time of the German invasion in 1940 – something that contributes to the pervasive atmosphere of uncertainty and confusion. Instead it is located in San Francisco. Secondly, the book is better able, simply by the fact that it consists of words, to allow, or even to persuade the reader to reflect on what Madeleine appears to believe – something that is necessary if her situation is to be understood.

Gévigne, a married man, contacts an old friend, a former policeman, after many years.  He asks him to carry out an investigation into the behaviour of his wife, who is given to dream-like states and periods of apparent absence from the material world.

Flavières had resigned from the police years before because he felt responsible for the death of a colleague who had fallen from a roof during a pursuit. He had been suffering from vertigo, which prevented him from attempting to make the arrest himself, but he has never been able to suppress the suspicion that he had been guilty of cowardice.

Whilst he is not in any way persuaded by Gévigne’s account of his wife’s condition and believes that it is probably just a question of another man, he nevertheless agrees to help an old friend. Gévigne arranges for him to see his wife at the opera since he has never met her. After that he begins to follow her as soon as she leaves her house in the morning.

It is not long before two things begin to happen. He observes Madeleine going into the trances described by Gévigne, thus providing evidence of his friend’s story.  Secondly, in spite of this, he begins to fall in love with her, almost imperceptibly at first but then deeply and to the point of obsession.

He finds Madeleine’s roving very puzzling, particularly when, on one occasion, she visits a cemetery and spends a considerable amount of time standing in front of a particular grave. It is only when he sees who is buried there that he understands why. At least he realises the connection with Madeleine, though he is reluctant to accept Gévigne’s hypothesis that she is in a state of reincarnation.

Then something occurs that brings matters to a head and it becomes impossible for Flavières to keep his activities a secret. He continues the investigation, however, in her company, more and more obsessed with but no closer to understanding her.

Part 1 of the book is concerned with telling the story of this mysterious woman and it is taken at a slow pace, as Flavières tries to come to terms with a concept entirely alien to him that death is not necessarily the end of life on earth. The reader also is intrigued by the question and by a situation that appears to admit no other possibility.

The second part of the book begins equally slowly, with Flavières simply going through the motions of everyday life until again something dramatic occurs to change that. From this point onwards the pace quickens as he is faced with a mystery of a different kind, but one that he is more than prepared to accept if only he can get the assurance he so desperately needs. Whether he will get it and what the outcome will be if he does are questions that haunt the reader until the very last page.

Apparently the partnership between the two writers was on the basis that Boileau should be mainly responsible for the plot and Narcejac for the characterization. However the work was apportioned, both elements of the novel are successful. The plot is intricate, absorbing and almost entirely believable. It is only after reading the novel that a percipient reader may point to some aspect of it that is not entirely convincing, but it will in any case be something very slight.

As for the characterization, it is impossible to forget either Flavières or Madeleine. What we take from the novel on a human level is that obsession is not love, and that if unchecked it can be destructive, even ruinous.