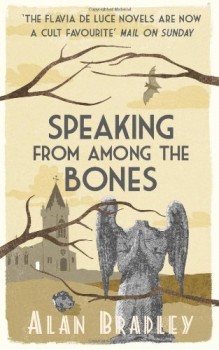 Speaking From Among the Bones

When the tomb of St Tancred in the village of Bishop’s Lacey is opened after 500 years, naturally young sleuth Flavia de Luce wants to be there, and succeeds in taking the first look into the tomb. But the body she finds isn’t the one everyone expected her to see.

The idea of an 11-year-old sleuth wasn’t one that I found easy to get my head around, but like plenty of others before me, I was quickly won over by the extremely engaging young protagonist and found Flavia de Luce to be anything but the twee character I’d expected. Yes, she’s precocious, but it’s hard not to fall under the spell of her obsession with poisons, and her acute observation skills.

The quintessentially English village of Bishop’s Lacey in the 1950s is about to host an event rather more unusual than a cricket match. The tomb of St Tancred is to be opened after 500 years and everyone is interested to see what lies in wait, especially when there have been rumours of a rather spectacular jewel set in the crozier that is said to have been buried with him.

Despite the best efforts of others to keep her away, Flavia demonstrates her usual talent for being in the right place at the right time, and is the first to look into the tomb, but what she sees isn’t quite what everyone – including her - expected. There is a body, but it’s rather more recent and a lot more sinister than simply the desiccated remains of their local saint. Despite the fact that the corpse is wearing a gas mask, Flavia immediately identifies the body as that of church organist Mr Collicutt, who has been missing for several weeks.

Events take an even stranger turn shortly afterwards when an effigy of St Tancred starts to weep blood. Clearly all is not well in Bishop’s Lacey and Flavia has now come into possession of a full hand of murders, as this is the fifth to come her way in such unlikely surroundings, reminiscent of an earlier version of the celebrated Midsomer, with a population that plummets all the time.

The plot is full of twists and turns and at times seems as dark and impenetrable as the underground tunnels in the churchyard that draw Flavia in like a moth to a candle, only with considerably less light. Flavia is sharp-witted, tenacious but has an air of fragility about her that often serves as a timely reminder of her age, something that Flavia seems all too aware of as she is fast approaching the milestone of being 12. She’s also all too aware that her family situation is rapidly approaching a milestone of its own, namely the loss of their beloved home, Buckshaw, to the bailiffs that her father can no longer stave off.

The fate and fortunes of the de Luce family is in many ways the more interesting tale in Speaking From A,omg the Bones and at times the murder is almost incidental to their story, particularly as Flavia uncovers another family’s dark secret, and one that may well shed some light on the shadowy figure of her own mother. The book ends on a massive cliffhanger and there’s no doubt about the fact that I very much want to know what happens next, as it is clear that Flavia’s life is about to be turned upside down in more ways than one.