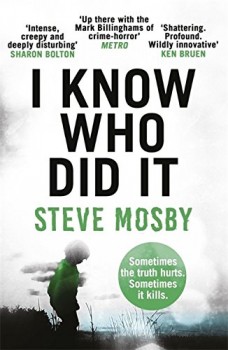 I Know Who Did It

When a woman turns up claiming to be someone who died in a car accident, detective Mark Nelson has to untangle the present from the past.

A police constable attends an incident where a woman has been found sitting outside a shop, looking dazed and confused. According to bystanders, she made her way there from a nearby field. She tells the police officer there’s been a terrible accident and she doesn’t understand where she is. Her face is covered in scars, but the most horrific thing is that they have been deliberately inflicted, over what appears to have been a long period of time.

Mark Nelson is a detective. With a PhD in behavioural psychology, his natural speciality is interviews, but he needs all his skills to handle the woman with the facial scarring. She says her name is Charlie Matheson, but the only snag is that Charlie Matheson died in a car accident two years ago. The woman claims she remembers dying, but is utterly adamant that she really is Charlie Matheson.

Nelson has a very tangled web to unravel. Charlie Matheson’s husband has moved on, much like Nelson has tried to put behind him the tragic death of his girlfriend some years ago in a swimming accident. His own past makes it easy for him to empathise with the man’s plight. Paul Carlisle has a fiancée now, and she’s pregnant, so he’s naturally not overjoyed that a woman has turned up, claiming to be his dead wife.

I Know Who Did It is a complex story, told in short, sharp chapters from several different points of view, each one headed with the name of the relevant character. Even with that, it wasn’t easy to follow what was going on, as interweaved with the investigation into Charlie Matheson’s death and subsequent ‘resurrection’ is the story of another detective, David Groves, whose young son was abducted and murdered several years ago, but each year, he receives a birthday card addressed to his son, the most recent of which claims that the sender knows who killed him.

Steve Mosby certainly excels at giving his characters tortured back stories. Reading I Know Who Did It left me feeling like I’d scored a line in a game of angst bingo! He also has a somewhat odd habit of mostly only referring to his police characters as ‘constable’ or ‘detective’, with the latter making me feel at times like I’d crossed the line into an American cop show, as there were no ranks added, which is the more usual convention in both the UK police force and crime fiction in general.

Once I’d got the characters straight in my mind – which did take some mental dexterity – I did start to get into the story, although the frequent shifts of narrator and storyline were at times rather jarring but, credit where it’s due, the reason for the two seemingly radically different plot strands did eventually become clear, and the link suddenly made everything fall into place. I Know Who Did It is complex, clever and ultimately far more satisfying than I’d originally given it credit for.