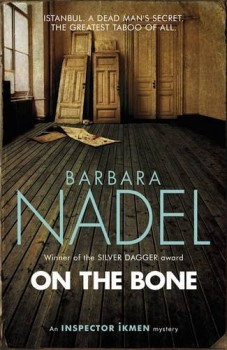 A man collapses and dies on a busy street. His stomach contains human flesh. Inspector Cetin Ikmen and his squad must unravel the mystery.

Barbara Nadel’s short-tempered, individualistic Istanbul detective Inspector Cetin Ikmen returns for his 18th investigation – and this really is really is a death with a difference! Naturally enough, it starts with a body, the liberal-minded son of a former Turkish general and plotter against the semi-religious Turkish government, who collapses on the busy and raucous Istikal Caddesi, one of the busiest streets in the Golden City. He is not the victim, but his corpse offers a lead to an unspeakable crime as his stomach contains human flesh!

The complicated investigation throws up a diverse cast of characters: missing persons who may not be even be a part; a mercenary American Jewish celebrity chef; ageing generals from the former military regime; artists, students, bikers and the colourful Zenne, cross dressing artistes.

The melting pot which is the Turkish capital is brilliantly portrayed with its conservative religious Muslims, moderates, the totally non-observant of whom Ikmen is one, plus a minority of Christians, including Istanbul’s last pork seller, Jews, officials on the take, political activists, refugees and terrorists.

The Ikmen series has rarely been upbeat – and little changes here. But as always, the story is a fascinating look at the changing face of a nation, its political landscape, and how those changes affect people from all walks of life. Nadel does not shy away from the harsh realities. The horrifying war in Syria and the emergence of ISIS play a critical supporting role. The disillusioned Imam Ayan, whose sons have been radicalised through the internet and Radwan, a young Syrian refugee, provide a counterpoint to haute cuisine and shadowy government departments.

Much of the action takes place on the north shore of the Golden Horn, but the switch to the Turkish-Syrian border is both gripping and authentic. Many of the main characters in the Ikmen saga remain. Others have disappeared, dying off, killed, divorced or just been posted away. Ikmen’s long-suffering wife Fatma, his aristocratic Ottoman deputy Mehmet Suleyman, together with his strong-willed mistress Gonca and Armenian pathologist Arto Sarkissian, continue to bring their talents and personalities to the story.

It’s tight, it’s clever, it’s Nadel at her best. The irascible and unsociable Ikmen must be nearing retirement. But I shall be sorry to see him go.