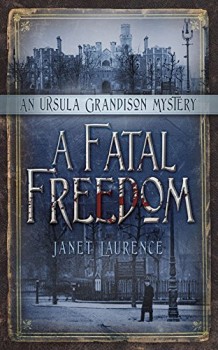 Would-be PI Ursula Grandison and her friend and former detective Thomas Jackman face a maze of blackmail and murder as they track a clever and ruthless killer.

Janet Laurence, a former chair of the Crime Writers’ Association and cookery columnist for the Daily Telegraph, is perhaps best known for her Darina Lisle and Canaletto crime novels. She now has a new heroine – English-based American, Ursula Grandison.

The surprisingly tough, independently minded and practical would-be private investigator, who seems to stumble into the most insoluble murder mysteries, is at her sparkling best as she flits between aristocratic drawing rooms and servants’ pantries in Edwardian London.
She struggles to make a living in a society where women have little freedom and few rights until a series of coincidences thrust her into another investigation.

Together with her old friend, retired police detective-turned-private investigator Thomas Jackman, Ursula must cut through a bewildering maze of blackmail and murder, motive and opportunity, to track down a clever and ruthless killer and prevent an innocent woman from facing the hangman.

The book is set in 1903, against a background of societal constraints and the growing fight for women’s suffrage, and is almost the perfect Edwardian mystery novel. It owes something to the work of Erskine Childers, whose brilliant Riddle Of The Sands, published that year, was the launch of the modern espionage story as well as carrying a strong political message.

Laurence continues that tradition. Beneath the genteel and mannerly world of London society she points up the dreadful inequalities of the time, when privilege was, as a matter of course abused, while the rest of the population often struggled to survive.

In a story complicated by a dense web of dead-ends and false leads, there’s also more than a nod to Childers who, like Churchill 30 years later, sought to warn the country over the growing ambitions of Germany.

This is a book for readers who like their stories intelligent. It’s a beautifully-written, historically accurate example of mystery with history. There’s little physical action, but it will still keep you turning the pages – and some of the supporting characters are absolute gems.

Now that Ursula has achieved her ambition, who knows where her next adventure will take her – and her growing relationship with the intelligent, thoughtful and determined widower Jackman?