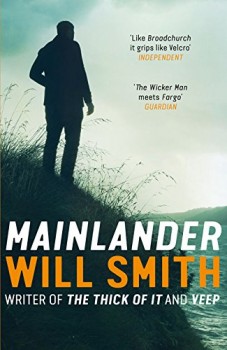 Young teacher Colin Bygate sees his student just about to throw himself into the sea – but the search for the boy only aggravates Colin’s wife and the community in Jersey.

Will Smith’s experience as a stand-up comedy star and a writer on award-winning television shows such as Veep and The Thick of It shines in Mainlander, a debut story about loneliness, secrets and not belonging.

Jersey in October 1987 is a place where memories of difficult WWII times seethe beneath the surface and where anyone who comes from the mainland finds it difficult to feel at home. It is closer to France than to England and the long-established community simmers with rivalries, old traditions and unspoken rules and nothing remains a secret for long, though the islanders will not wash their dirty laundry in public.

Colin Bygate, an outsider originally from Bristol, now married to islander Emma and working as an English teacher in a school, doesn’t feel accepted by the natives. Just because. He’s a quite naïve decent guy in his late 20s but so thoughtful and kind that Emma searches for fun in the arms of Rob de la Haye, her ex-boyfriend whom Colin loathes with passion. Rob inherited the island’s biggest hotel, throws his money around and enjoys making dodgy business deals.

One evening Colin, sitting on the rocks by the sea following a row with his wife, sees his student, 16-year-old Duncan Labey, who appears as if he is just about to jump into the cold water. He stops the boy and drives him back to his parents’ home. He hopes that the apparent wish to commit suicide was just a figment of his own imagination.

But Duncan fails to turn up to school the following day and then delivers a letter to Colin’s flat, saying that he just can’t go on. The school headmaster plays down the truancy, the police aren’t concerned either, and Duncan’s parents don’t want to talk about his disappearance. The rumours spread, and Colin’s responsibility for the teenager is caricatured, as accusations of drug dealing, child abuse and bribery float around.

Very soon a claustrophobic tense web of sub-plots and characters emerges. Detective Barney Vautier, ex-boxer and the classic local hero, perfectly sums up the nature of the location: “We’re on an island. Know what that means? Surrounded by water. No way off it. So he’s not really missing. He’s just not where he’s supposed to be.”

Mainlander captures the spirit of the 1980s: politically incorrect, sexist, with casual racism and discrimination, and Dire Straits’ soundtracks thrown in. It’s a cross between a comic social commentary on the tight-knit community, and a thriller, with a body and some dark unexpected violence. The ending is slightly disappointing following the emotional nerve-wracking storm and the expectation of a different, stronger resolve for the case. But maybe Colin’s decision (quiet fight rather than flight) was the best in the circumstances.