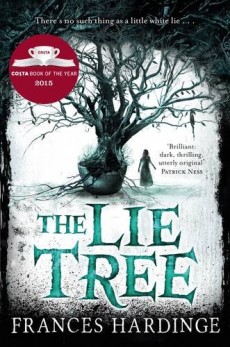 Faith’s scientist father is found dead under strange circumstances. In his belongings she discovers references to a tree which feeds off lies and bears fruit revealing secrets.

Frances Hardinge’s brilliant, dark, but often lyrical Costa Award-winning story was conceived as a children’s book, but really is so cleverly constructed and beautifully written it can be enjoyed by all ages.

Faith Sunderly is 14, an age when young Victorian ladies were seen, not heard, their duty to prepare themselves for marriage, home and motherhood. Her trouble is that she is both clever and possessed of an insatiable curiosity. Her struggles and frustrations at not been taken seriously offers plenty of opportunities for humour, while her determination to become involved in the scientific work of the stern father she adores is far in advance of her time.

The story opens with the family heading to the fictional Channel Island of Vane where her father has been invited join an archaeological dig. Faith begins to suspect that their reasons for leaving London home aren’t what she has been told and that her father’s reputation as an eminent natural scientist is under question.

Life on the island sours when the rumours follow them, then the mysterious death of her father leaves both unanswered questions and potential family ruin. Faith is determined to untangle the truth. Searching his belongings for clues she discovers references to a strange tree that apparently feeds off whispered lies. It will take all her brains and courage to discover the truth, and what, or who, killed her beloved father. The Lie Tree itself aids her quest – in its own way! It has the power to reveal hidden secrets, but must be fed with lies in order reveal what it knows. The more people believe a lie, the more truth the tree reveals.

Faith is caught in a dilemma. Is truth always good? Aren’t some things better left unsaid? As she unravels the mystery, Faith is drawn by her situation – and the tree – into seeing too much and discovers absolute truth can be the most damaging of all.

Despite its powers, the tree is never allowed to dominate this fantastic tale. This mixture of Gothic horror, detection, morality and history blended around strong central characters has a real narrative tension which will keep you reading to the end of what is a true Victorian melodrama.

The characters are all brilliantly drawn. Faith is naive and desperate for the acceptance of her father. She also has intelligence beyond her years, an understanding of the ways of the world and the unfairness of her place as a female within society. Like most teenagers she is capable of both passionate loves and hatreds. Her mother Myrtle is a complete contrast. A typical woman of her time, ignored by her husband and society, apparently concerned only with dress and appearance, she uses what weapons she has. Many of the main characters are male and Faith meets constant obstruction from them. But despite the conventions of Victorian society, it is the females who are vivacious and strong, although never over-painted.

The setting is both atmospheric and beautiful in its detail and Hardinge’s command of language, whether describing the weather or an eccentric cast of minor players, is both imaginative and original.

In the past, I’ve been bitterly disappointed by books the great and the good of judging panels thought award-worthy. But this superbly evocative story with its carefully balanced intrigues, dramas and societal issues, together with its wonderful cast, clever plotting and sparkling prose deserves every bit of praise it gathers!