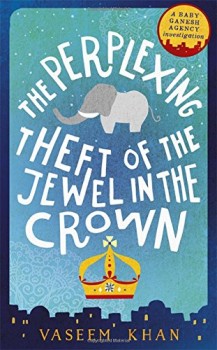 The Peplexing Theft of the Jewel in the Crown

Inspector Chopra (ret’d) is actually present when the Koh-i-Noor diamond is stolen from its display case, and to save an old friend must help to ensure its recovery.

Heart trouble has forced Inspector Chopra to resign from the police, but detecting is in his blood. At the end of his first outing, The Unexpected Inheritance, he set up the Baby Ganesh Detective Agency, named after the endearing young elephant he was bequeathed by his deceased uncle. The agency, and Ganesha, are based at the Poppy Bar and Restaurant, named in honour of Chopra’s wife.

As the book starts Chopra and Poppy are reawakening from a gas attack by thieves on those who witnessed their theft of the Koh-i-Noor, the famous jewel from the English crown which has been put on display in Mumbai. Garewal, an ex-colleague arrested for the theft, implores Chopra to clear him. Although there is evidence implicating Garewal, Chopra has already seen one or two indications that others were responsible.

High demand for Chopra’s services enables him to employ Rangwalla, an old subordinate, and Poppy soon commandeers the new man to assist with a theft at St Xavier’s Catholic School, where she has recently taken a job as a teacher. Poppy’s frustrated maternal instincts are also soothed by the arrival of an abused boy, Irfan, at the restaurant. Irfan has quickly formed a close relationship with Ganesha, but lives in fear that his abusive father will find him and return him to a life of crime.

It takes a while before progress is made with any of these challenges. Chopra and Ganesha temporarily join a circus to gain access to the home of a man Chopra suspects of complicity in the jewel theft. Poppy and Rangwalla challenge the head of a rival school without success. Irfan’s father turns up at the restaurant to reclaim him, and government officials arrive to take Ganesha away. But with such a talented team on the job, it is only a matter of time before justice is restored.

The Perplexing Theft maintains the excellent standard of the series, and with the impressive number of plot elements there is never a dull moment. The city of Mumbai comes through very strongly, and the author gives a convincing picture of both its horrors and the ebullience and exuberance which keep the inhabitants going.

There are villains, including mother-in-law Poornima Devi, and heroes, in particular Ganesha who as ever takes the prize as the most irresistible of all. And, of course, there is plenty of humour throughout.