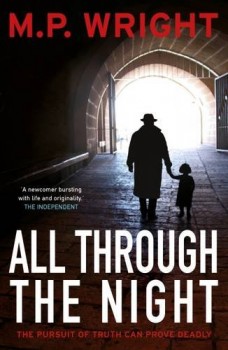 All Through The Night

Bristol private investigator JT Ellington is hired to retrieve some papers stolen from an orphanage, and to find the truth. That’s the part of the job that proves the hardest.

Bristol, summer of 1966: JT Ellington is struggling to make ends meet as a private investigator. It’s not easy being a black, ex-copper from Barbados in a country where racism is still as rife as fleas on a stray dog, but Joseph Tremaine Ellington – JT to his friends - does his best to stay on the right side of the tracks.

When the administrator of a local orphanage approaches him and asks him to locate a down-at-heel Jamaican GP, Dr Fowler, it looks like JT has the chance to make some easy money. All he has to do is find the guy – he knows his shady cousin Vic will be able to help with that – and get back some papers Fowler stole from the orphanage. The hatchet-faced Ida Stephens is willing to pay well over the odds for his time, and at first it looks and sounds like a simple job, but then she throws in one last thing, telling him to ask Fowler where to find the truth.

JT has a nasty suspicion there’s more to the job than meets the eye, and that’s soon confirmed when he and the shady doctor have to make a hasty exit from a pub, pursued by armed men.

I was very favourably impressed with JT’s debut in Heartman, so picking up All Through the Night was a certainty. JT makes a stylish and sharp narrator, the dialogue always comes over as authentic, and MP Wright pulls off the difficult trick of imbuing the book with the rich speech patterns and patois of the black community in the St Pauls area of Bristol without it coming over as false or forced.

JT is a man with a big heart and an innate sense of right and wrong, in total contrast to his cousin Vic who never met a dodgy deal he didn’t wholeheartedly embrace. But Vic is also there to pull JT out of trouble and watch his back. JT and a young girl on the run from the orphanage are pursued across the West Country by rogue cops and some very nasty villains. He even ends up in a well-known pub on top of the Mendip Hills, the haunt of both locals and cavers alike.

Although Wright takes more than a few liberties with his descriptions of the caves and mines under the Mendips, I’ll happily forgive him that in return for a brisk and brutal pursuit underground and overground, set in the depths of a landscape that can at times be as bleak as the hearts of the men trying to get their hands on the girl that JT has promised to protect. After all, the chances of the book falling into the hands of a reviewer who was drinking in the Hunter’s Lodge Inn on the same day as reading the book, and who’s also been down the cave that plays its part in JT’s escape is probably vanishingly small! This is another book that’ll be taking its place on the bookshelf devoted to novels with caves and mines in them.

All Through the Night is slick and fast-paced, with several genuinely heart-in-the-mouth moments as it builds to a climax that doesn’t pull any punches.