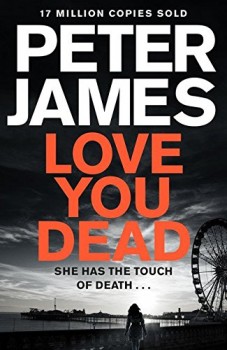 Detective Superintendent Roy Grace has to contend with two old adversaries, as well as a beautiful gold-digger with a very scary hobby.

Jodie Bentley was an ugly ducking as a child, but had ideas way above her station. Plastic surgery and an unerring ability as a gold-digger have helped her be both beautiful and rich. But she still has one ultimate goal in mind, and she needs serious amounts of dosh for that. And she’s a woman not to be meddled with when it comes to her hobby …

Peter James has kept this series crisp and fresh all through, and book 12 is no exception. There’s a lot going on in Love You Dead, but James, a consummate storyteller, juggles several plot threads adeptly, including a number from previous books.

One of those is Det Supt Roy Grace’s AWOL wife Sandy. Early on, it looked like that thread was going to outstay its welcome by quite some way, but James has balanced it judiciously in later books, and matters look like coming to a head soon.

As well as Jodie and Sandy, Grace has to contend with the relative failure of his previous case where the murderer escaped. And there’s a return, too, for Tooth, the assassin from last time out who is determined to do his job in England and get home to his dog …

One of James’s strengths is his matter-of-fact, no-frills narrative (not surprising, given his movie background) and the way he presents his characters as people you can imagine encountering at work or in the pub. The police team come across as thoroughly believable professionals who are all pulling in the same direction.

Roy and new wife Cleo are now in an idyllic country cottage with son Noah, but work is always at the front of his mind. DI Glenn Branson (one of my favourite characters) and his new girlfriend are in the background, but old-school cop DS Norman Potting, grieving for the death of his fiancée Bella, has a key role to play in this book. And be prepared to say farewell to a much-loved character!

Roy and Co are out of the limelight for some of the book, but James has two strong characters in gold-digger Jodie and assassin Tooth to keep things moving. And if you don’t like reptiles, you may be reading chunks of this book through your fingers!

James’ books ooze realism, thanks to the extensive research he undertakes with the police. The only minor issue that strikes me is smarmy ACC Cassian Pewe, who detests Grace and makes threats that I always wonder how effectively could be carried out. But no doubt there’s someone like him somewhere in James’s research notes!