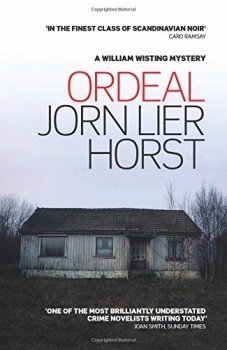 Chief Inspector William Wisting is bothered by both the unsolved case of a taxi driver who disappeared in winter, and criticism from the press and the public.

The Norwegian author Jørn Lier Horst, a former Senior Investigating Officer at Vestfold Police district, brings his vast experience, inside knowledge and unique writing style to the series of books about William Wisting, a policeman who has risen through the ranks to become Chief Inspector in the Criminal Investigation Department of Larvik Police.

Wisting, a 55-year-old widower and a father of grown-up twins, has been working on the case of disappeared taxi driver Jens Hummel for more than six months. The investigation has been fruitless, he has endured public and press criticism but isn’t ready to shelve it.
At the same time Wisting is struggling to come to terms with his daughter’s new situation. Heavily pregnant Line decided to leave her job as an investigative journalist in Oslo, move closer to her father, and eventually start a freelance career. In the small town she bumps into her school friend Sofie Lund, a single mother with a small child, who inherited her deceased grandfather’s old house, full of unpleasant childhood memories. Sofie’s grandfather Frank Mandt was the local notorious crime lord, and a very nasty person.

The women rekindle their friendship. In the basement of the house they find a locked safe. Thanks to the locksmith’s help they discover piles of money, documents and audio tapes, as well as a gun which might help the police in solving the missing taxi driver’s case. Line hands in the gun to her father for the forensic examination but promises her friend not to reveal anything else …

A chance leads William Wisting to a farm where Hummel’s taxi is found, and soon another discovery is made: of his body hidden in a heap of dung. Nothing is clear, except for the tenuous links to the kingpin Frank Mandt. Also, new evidence points in the direction of Danny Brodin, already in prison awaiting a court hearing for the murder of a young woman in the neighbouring police district of Kristiansand. The police case is water-tight but Wisting cannot help but unravel the concluded story even though he’ll face further disapproval from both police departments.

Jørn Lier Horst deserves more attention and recognition from the fans of the Scandinavian crime fiction. Political context and social commentary permeate his writing but subtlety and tact make the novels a thoughtful and enjoyable read. You won’t find Harry Hole’s brutal violence, Kurt Wallander’s glum drinking or Martin Beck’s monosyllabic encounters with his daughter. Wisting seems to be just an ordinary man, a loving father and a good friend, following the rules and trying as best he can to deliver justice.

Ordeal is the tenth title in the series, and fifth to be published in English, in Anne Bruce’s translation. In this solid and engaging police procedural with an insight into Norwegian life Lier Horst also brings a credible sense of realism: ordinary things happen to the normal people, and sometimes they lead to crime.

And the latest news is that Chief Inspector William Wisting will be brought to life, thanks to the author’s recent partnership with a Danish production company. The stories will be shot in Larvik Stavern as the place is a character in itself, and very important in Wisting’s world.