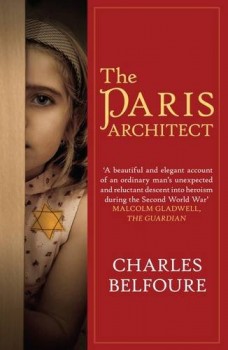 An architect, desperate for work, accepts a commission to design hiding places for wealthy Jews in occupied Paris. When one dramatically fails, he unwilling becomes a Resistance hero.

The Paris Architect is an exquisitely written, vivid and suspenseful story of Paris under German occupation, with all its contradictions, opulence, desperation and fear.
Belfoure’s theme is selfishness. What would you risk to help a stranger? What right is worth trading your life for?

Struggling architect Lucien Bernard is offered a large sum to devise unique hiding places from the Gestapo for either wealthy or important Jews. He is a typical French bourgoisie: self-centred, self-important and deeply anti-Semitic – as were most of the population. Even today, in the countryside around Beaune, farmers blame ‘Les Juifs’ for anything from a tractor breaking down to a storm ruining the harvest.

Despite Lucien’s fears, he accepts, needing money to maintain his lifestyle, which naturally includes a mistress – who is two-timing him with a fanatical Gestapo colonel – even though knowing anyone caught helping a Jew will be tortured and killed.

His success leads the wealthy industrialist who commissioned him – and who too is leading a double life – to set him up with a factory commission that involves working with a German army officer who admires architecture and art. As his profile and wealth increases, so does the danger. His assistant hates him and plans betrayal. A priest persuades him to care for an orphaned Jewish boy.

But as the stakes grow higher, one of his hiding places spectacularly fails. Lucien is wracked by guilt and his thoughts turn from money and advancement to vengeance. At the same time he finds love with his fashion designer mistress’ assistant, is threatened by the Resistance for his work for the Germans, and after meeting some of the long-established French Jews he has helped to save, becomes a reluctant hero.

I loaned this moving and elegant account of a man’s journey to find himself to a French neighbour in the Dordogne village where I live, whose father was not only a major landowner but also deeply involved with the Resistance. Her only criticism was that not enough emphasis was given to the dreadful privations of ordinary Parisians, permanently close to starvation and under constant threat of deportation or death for the most minor infringements of a rule enforced by the Gestapo. No wonder many would inform on their neighbours, let alone Jews, for the price of a couple of square meals.

At the same time, the elite of society, actors like Maurice Chevalier and Yves Montand and singers like Piaf, continued their life as before. Adele, Lucien’s faithless mistress, is undoubtedly modelled on the sexually intemperate and fiercely anti-Semitic Coco Chanel, who committed herself to the German cause as early as 1941 and worked for General Walter Schellenberg, chief of SS intelligence.

That criticism apart, the book is brilliantly researched, seamlessly integrating architectural detail into a compelling and thoughtful story which avoids most of the usual cliches associated with France in World War II. Belfoure’s characters are well-rounded and intricate and his believable plot moves along at a good pace, blending art, historical fact and some gruesome torture scenes in a real page-turner.