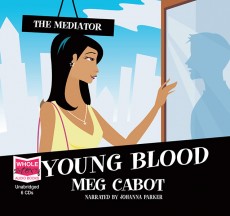 Being in love with a ghost doesn’t make things easy for 16-year-old ghost-buster Suze Simon, especially not when his grave gets uncovered by accident in her own backyard.

Susannah Simon – known to her friends as Suze – isn’t having the easiest time of things over the summer. Her stepfather, Andy, believes in everyone getting a job in the long school holidays, so Suze has ended up working at a swanky local resort with a hotel and golf course. She hates the uniform, but babysitting children while their parents go off golfing isn’t too bad.

Eight-year-old Jack Slater is a nice kid, but painfully shy and withdrawn. Suze soon finds out why. Jack is a mediator, and he can see and talk to ghosts, just like she can. His elder brother Paul is not so nice, and Suze does her best to stay away from him, preferring to spend time with Jesse. But the only problem with that is the mildly inconvenient fact that Jesse has been dead for 150 years, and although Suze can see, hear and touch him perfectly well, he’s hardly someone she can introduce to her family and friends.

While Suze is working at the Pebble Beach Hotel, Andy and her stepbrother Brad are digging a hole in the back yard to install a hot tub. The discovery of some letters in an old box sends Suze off to the local historical society, but the following day the archivist she met is found dead, and a portrait of Jesse has gone missing. Then an even more startling discovery is made in the back yard: an old grave. It doesn’t take a genius to guess whose body has just been found.

Young Blood, the fourth book in the Mediator series (also published as Darkest Hour under Meg Cabot’s pseudonym, Jenny Carroll), advances the ongoing story of Suze’s relationship with Jesse, the hottest – and seemingly most oblivious – ghost she’s ever known. Suze is a sparky, strong narrator, voiced perfectly by Johanna Parker, and it’s not hard to get what Suze sees in handsome, protective Jesse. When Jesse disappears, Suze is prepared to go to any lengths to get him back, even following him somewhere that only the dead should be able to go.

I read these books when they first appeared, and have thoroughly enjoyed following Suze’s exploits a second time on audiobook. Johanna Parker is an excellent narrator, at home with characters of all ages, both female and male, bringing them vividly to life. I’d forgotten much of the detail, and was on the edge of my seat, wondering how Suze was going to pull off one of her maddest stunts yet. This is a stylish and always entertaining series.