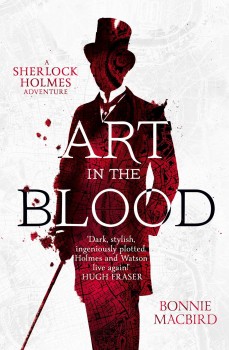 Art in the Blood

Sherlock Holmes is approached by a beautiful French cabaret star when her illegitimate son by an English aristocrat goes missing.

Bonnie MacBird is the latest contender to enter the lists of Holmesian revival and this delightful and entertaining adventure is worthy of the Master himself, with vivid and painstaking period detail, a labyrinthine plot and snappy pacing. Most importantly, while she updates her villains by introducing crimes Doyle could not possible have described in his much more repressed era, she shows her deep respect for the classic lead characters, rendering the relationship between Holmes and Watson with a stunning authenticity.

But her touch of Hollywood – dialogue and attitudes at times call to mind some of the pairings who best portrayed them, and other characters, particularly the fiery and beautiful cabaret singer Mlle Cherie Cerise, nee Emiline La Victoire, and Holmes’ French rival Jean Vidocq – appear cast with an actor in mind. This added sparkle does nothing to detract from a fast-moving story that takes the reader from the cabarets and artists’ studios of Gay Paree, including an all-too-brief appearance by Toulouse Lautrec, to a snowy and grim country estate in Lancashire, mixing real and fictitious places and characters.

Mlle La Victoire appeals to Holmes to find her illegitimate son by an English aristocrat who has disappeared. She herself has been attacked. At the same time, Holmes’s elder brother Mycroft, the indolent but powerful British intelligence mastermind, shows a hitherto unseen harder side to his character as he demands Sherlock’s attention in the case of a Greek statue, possibly the most valuable ever found, stolen in a murderous attack in Marseilles, and a target for three governments.

Plenty of twists and turns, plots and sub-plots, as the apparently separate investigations converge, plus some chilling and convincing villains make this a fast-paced page-turner. One interesting aside is Holmes’s involvement in the Ripper investigation, with its hints of corruption and intense pressure from very high places, possibly close to the throne, to disguise the serial killer’s identity!

All this while also efficiently conveying the nostalgic, pleasant feel of scenes in Baker Street and rattling along London streets and the English countryside in cabs and trains. But it is MacBird’s portrayal of the genuine warmth in the relationship between Holmes and Watson which makes this a worthy successor to Doyle’s ripping yarns.