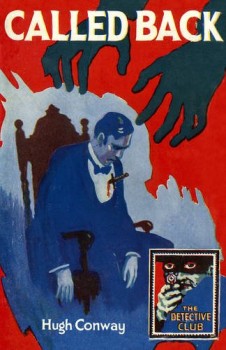 A blind man stumbles on a murder. Because he cannot see, the assassins allow him to go. He later recovers his sight and falls in love with a mysterious girl who is in some way involved in the crime.

This reissue is the first in a series of classics from the Detective Story Club, launched by Collins in 1929, as a clearing house for the best and most ingenious crime stories of the age. Almost 90 years later, they maintain their original appeal.

Hugh Conway was the pseudonym of Frederick John Fargus, mainly a short story writer, who had work published in All The Year Round, and Blackwoods before dying aged just 37. A ‘shilling shocker’, this surprisingly modern murder mystery was first published in 1883. It was an instant success, selling an almost unbelievable 350,000 copies in its first year, and was adapted as a stage play. It was also filmed twice, in 1914 and again almost 20 years later.

Gilbert Vaughan is a typical Victorian hero. Well-connected, well-educated, of independent means, he’s an archetypical young English gentleman. True to stereotype, he is practical with a strong dislike of mystery. He hides any romantic feelings behind a prosaic and rather formal exterior.

At the age of 25 he goes blind, but after a period of despair, attempts to adjust to his new life and begins carefully controlled secret outings. Chance makes him a witness to a murder, but the killers, confident he cannot recognise them, spare his life.

Advancing medical science sees an operation remove his cataracts and restore his sight and during a trip to Italy he is strongly attracted to a beautiful, but strangely unresponsive girl. They meet again by chance in London and Vaughan, who has fallen deeply in love, agrees to the demands of her guardian uncle in order to wed her. But his new bride remains detached from reality and a deep amnesia leaves her without a past.

Vaughan becomes convinced that some traumatic event has affected her mind – and that she is somehow connected with the killing he witnessed and sets out both to prove his theory and win her love.

Conway’s work has verve – and makes full use of the long arm of coincidence so beloved by the readers of the ‘shilling shockers’ which revolutionised a nation’s reading habits.

Set in the 1860s, it has a surprisingly modern psychological and supernatural twist – another popular Victorian feature – and plays on the ever-present British fear of the threat of republicanism, all wrapped up in an almost Arthurian quest for truth and true love.

The stilted, withdrawn Vaughan makes an unlikely, but ultimately convincing, Sir Galahad and this fast-paced escapist thriller, spanning two continents, is one of the very best of its type.

The language is very Victorian, but once you get into this clever and exciting story, that ceases to jar the reader and becomes part of its overall charm. A winner then – and a winner now! It’s well worth a read for those bored by the relentless noir and thud ’n blunder of so much of modern crime writing.