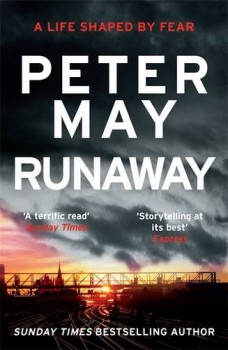 The idea for Runaway’s good. Four old friends from the city recreate the road trip to London they made 50 years before as aspiring pop stars – which ended with them involved on the fringes of a murder. The execution’s poor.

It’s not that May can’t write well – mostly it’s that the story is smothered by 21st century political correctness and any sense of the freedom of sex, drugs and rock ’n roll which dominated sixties London is buried. The dreadfully predictable murder angle just appears tagged on.

The book is split into two parts – a rite of passage tale, the beginning of which captures the optimism and naivety of youth, and the second part reflects the shortcomings and failures of age. But it really goes nowhere – just a string of incidents, many of which contribute little to the story.

Jack Mackay is expelled from school and decides to run away to London. The four other members of the band he plays in decide to go with him, partly to escape the numbing certainties of 1960s Glasgow and partly believing they can find fame and fortune. London may be exciting, but it’s a place where young people are manipulated and used, caught up in events they can’t control. Few can be trusted and apparent favours lead to demands for extravagant returns.

It all turns sour and the adventure ends as they flee fringe involvement with a killing. Fifty years on, one of the band members, Maurie, now terminally ill, reveals that the prime suspect was innocent – but he knows who did it. He persuades Jack and Dave, the two remaining band members in Glasgow, to go back with him to put things right.

The 1960s trip is narrated by Jack in the first person, while the present day section is in the third person, though still from his perspective. Both are in the past tense, a device I found irritating.

One of May’s great strengths has always been authenticity and a very real sense of place. His descriptions of the southside of Glasgow, places, attitudes, language and lifestyle all seem to fit that bill; his London scenes often do not. True, there were strange experiments and excesses, but this is more a pop-fiction version of events than the city in which I grew up.

The two journeys allow him show the changes in the country – and he does so well, but with an impeccably PC view. He tries to balance this with plenty of attempts at humour, much of it inane and regressive, but more or less what you could expect from a group of ageing friends.

The whole story can be summed up in one passage. The band, competent enough cover artists, try to write their own song. They choose the title ‘Runaway’. The chorus line is: ‘Run, run, run, run, runaway!’

Have they, or May, ever heard Del Shannon’s 1961 chart-topper on both sides of the Atlantic? Close, but no cigar!