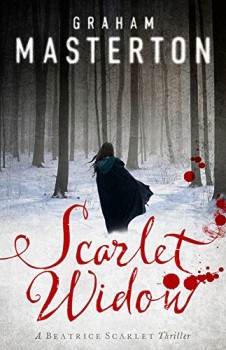 Orphaned at 16, Beatrice Scarlet marries a Protestant preacher and emigrates to America. When animals are found slaughtered, with indications of satanism, she suspects a human rather than a supernatural hand.

Scarlet Widow is a superb piece of historical horror. Graham Masterton is an expert at combining suspense with laying the groundwork for an intricately plotted thriller.

Beatrice Scarlet is an apothecary’s daughter who can mix medicines to save her neighbours, but loses both her parents, her mother to TB, her father stabbed by a drunk, by the age of 16. She marries a young Protestant preacher and they emigrate to America where he can practise his faith with others who share his beliefs.

Six years later she is the mother of a young son. Then the New Hampshire farming community where they now live is hit by a series of inexplicable deaths and illnesses of livestock, starting with their own six pigs slaughtered, with slices of looking-glass embedded in their mouths.

According to fundamentalist scripture, this is the work of Satan, and suspicion soon spreads as people start to die in circumstances apparently mocking Christian beliefs. When a stranger offers the farmers a deal with a demon he says is causing the deaths, some are eager to comply. But Beatrice suspects the hand of man. As she closes in on the killer, the pressure to act quickly mounts – before she becomes the next victim.

This beautifully-crafted story with its compelling depictions of conditions on both sides of the Atlantic in the middle of the 18th century and clever management of plot and pace does not hold back on the hardships, brutality and dangers of either, using often brutally stark descriptive language.

Beatrice is a charismatic and courageous heroine, clever, compassionate and well respected in the community. As a trained apothecary, she has both an independent mind and a more rational outlook than many of her fundamentalist neighbours, but she must pay a heavy price for her pursuit of justice.

Scarlet Widow is a fine piece of writing with some genuinely horrific moments. This is the start of a new series involving Beatrice – I look forward to her return.