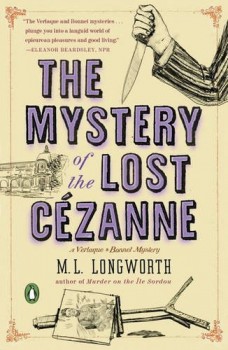 The Mystery of the Lost Cézanne

A friend asks Antoine Verlaque to visit a man called Rene Rouquet, who lives in an apartment once occupied by Paul Cézanne, and who may have discovered a lost Cezanne painting. When he arrives at the apartment he receives a severe shock.

This is a very difficult book to describe and, containing as it does so many different elements, almost impossible to categorise. It is a crime novel in so far as it contains a murder – two murders, in fact, though the second one takes place offstage, as it were. It is to a certain extent reminiscent of Agatha Christie in that there is a very full list of suspects, as well as a lengthy explanation of motive and method at the end.

The big difference, however, is that this book has a real sense of time and place – something that remains true even when we are taken back to Aix-en-Provence at the end of the 19th century. The description of La Fête des Rois, both in 1885 and today, has the effect of demonstrating a certain cultural permanence, however much the outward appearance of the town may have changed.

We have also those two characters often found in French crime literature, the examining magistrate and the police commissioner. However, whilst the normal practice is to make these very busy, in this book we hardly see them at all in their professional capacities, even though murders are committed.

As far as Antoine Verlaque is concerned the search for the missing painting is driven by a desire to discover whether it is a real of a fake Cézanne. He views it less as a crime and more as an opportunity to pursue an artistic interest – one which the author clearly shares and which she attempts to pass on to the reader. This is particularly true in the flashback scenes involving Cézanne and Manon. We share his delight at finding, in the most unlikely person, someone who shares his sense of the beautiful. The only criticism of this look back in time is that there isn’t enough of it and it comes to an abrupt end.

Even in the modern day story the characters are more interesting than the plot.  What, precisely, is wrong with Marine, for example, and why does she treat Antoine in such an offhand manner?  What too is the mystery behind the glamorous Rebecca?

If one had to summarize this book in one word that word would be ‘charming’, with the charm allied to a sense of nostalgia calculated to appeal to all those – Frenchmen and other nationalities – familiar with Provence. The charm looks set to continue because the book ends on a high note, deliberately leaving a very important matter unresolved.