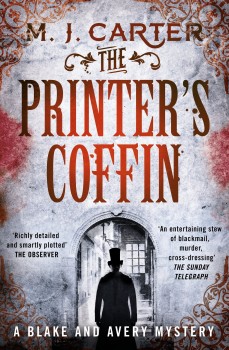 Blake and Avery are back in England and charged by philanthropist and social reformer Lord Allington with investigating the strange murders of two printers – which London’s new police force seems determined to ignore.

This is a very different setting for the return of the MJ Carter’s Holmesian pairing, the often naive man of action Captain William Avery and the conflicted, but multi-talented chameleon which is intelligence operative Jeremiah Blake.

She bridges the gap from the heat of India, where the pair made their names – and their literary debut – in The Strangler Vine to the filth, poverty, wet and cold of Victorian London with a surprisingly contemporary, beautifully detailed and smartly plotted story.

The pair have returned to England separately – Avery, via a difficult tour of duty in Afghanistan, to the stultifying boredom of semi-retirement as a Devonshire squire and Blake, still partly working for his former boss, Theophilus Collinson, head of the East India Company’s Secret Department, to an uncertain life as a private investigator in London.

Blake contacts his former partner with news of a commission for the pair, made famous by reports of their Indian adventures and a popular portrait of the climax of those events. Philanthropist and social reformer Lord Allington wants them to investigate the strange ritualistic murders of two printers – which London’s new police force seems determined to ignore.

They enter a mire of pornography, blackmail, informers, revolution and murder in a sinister, but historically accurate, tale peopled by characters either real or based on reality, which superbly captures the period atmosphere.

It is also a pertinent and implicit comment on both the price of a free press and the continuing struggle of the working classes for a united and effective voice in the face of rapid technological change and exploitation by either birth or wealth.

The divisions within the Chartist movement – that idealistic dream of reform which would eventually lead to the foundation of both the trades union movement and the Labour party – is meticulously researched and sympathetically presented without ever being judgemental. Neither is the battle for a free press, symbolised by Henry Mayhew, founding editor of Punch, and the importance of the printed word in social reform is recorded with clarity and understanding.

Read this as social history and you will be surprised how little society has actually changed. Read it as a tight, action-filled detective adventure and it more than holds its own with those in a more modern setting. Carter’s strength is to be able to combine the two with elegant and occasionally witty prose.